Whatever PETA does in the U.S., our counterparts in Germany always feel like they have to do it better. A month or so ago, we were patting ourselves on the backs after a protest where we burned Colonel Sanders in effigy was picked up by national media. Well, in Dusseldorf today, PETA Deutschland—who apparently felt that the demonstration just wasn’t exciting enough for the discriminating German audience—decided they needed to spice it up by bringing along a firebreather in a chicken suit. If by some odd chance you get Germany’s main television station, RTL TV, you should be glued to your set tonight for the exclusive footage. The whole thing is kind of incredible. 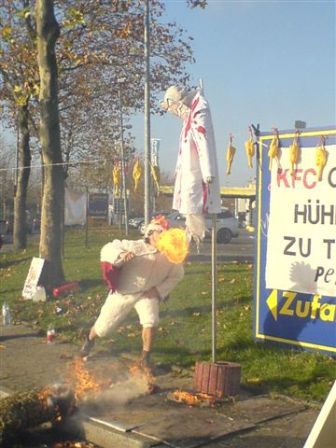 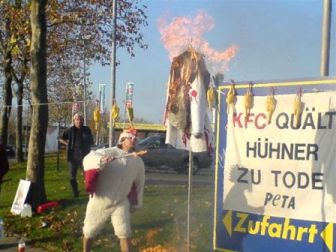