Our recent demo in Kansas City was really, really crappy. Which was good, considering that we were handing out toilet paper. You see, we staked out a local steakhouse and greeted patrons with T.P. that was embossed with a special meaty message. Why give away this fly two-ply? Someone needs to tell meat-eaters that they’re full of crap. 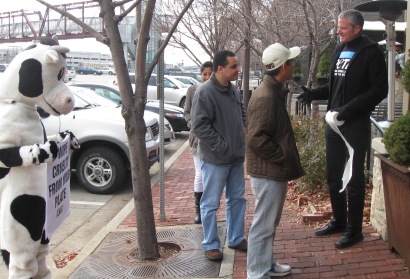 And here’s a close-up from our Columbia demo: 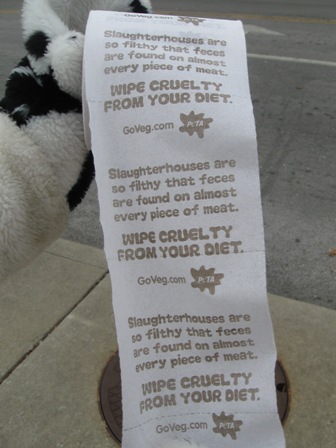 Consider this nasty little nugget of truth: A lot of the flesh from the 10 billion animals who are killed for meat in the U.S. each year is contaminated with E. coli, campylobacter, listeria, and other dangerous bacteria that live in the intestinal tracts and feces of animals. Just think about it: Animals on today’s factory farms are crammed by the tens of thousands into filthy sheds and slaughtered on killing floors that are contaminated with feces, vomit, and other bodily fluids. Is it really any surprise that these unsanitary conditions breed bacteria? Um, that would be a hell-to-the-no!

With more than 75 million cases of food poisoning each year in the U.S.—70 percent of which are caused by contaminated animal products—no one can deny that tainted meat is a major health threat. Plus, even if the bacteria in your burger doesn’t kill you now, the saturated fat and cholesterol might lead to obesity, heart disease, and certain types of cancer later on down the road.

Our demonstration also made it down to Omaha. Check out these fantastic pictures: 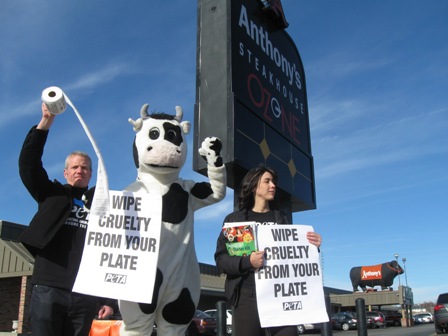 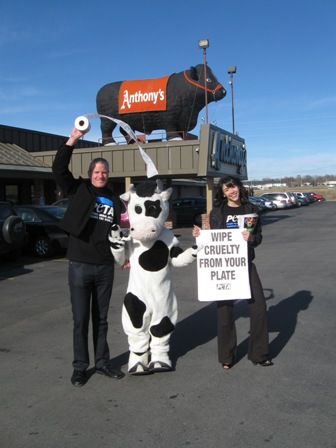 That said, what would you like on your veggie burger?