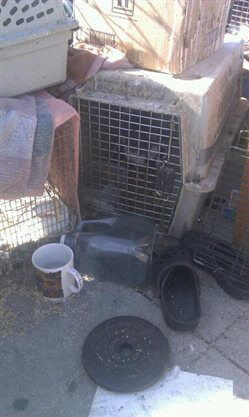 We may never know how more than a dozen pigeons, crows, seagulls, and other wild birds ended up crammed into filthy cages in a hoarder’s home, but when PETA heard about the birds—who were spotted piled on the sidewalk after the hoarder was evicted—our Cruelty Investigations Department took action.

After PETA contacted animal control and alerted the U.S. Fish and Wildlife Service (USFWS) to potential violations of the state cruelty statute and federal Migratory Bird Treaty Act, all the birds—some of whom appeared to be sick and suffering from heat exhaustion—were seized, and officers launched an investigation.

Not only is it illegal to possess most wild birds without a permit issued by the USFWS, these animals were also victims of hoarding, a mental illness in which the hoarder compulsively acquires more animals than he or she can properly care for. Animals are often “warehoused” in filthy cages and carriers and denied clean water, adequate food, and veterinary care. Accumulated waste and filth often lead to infections and the spread of parasites and contagious diseases.

If you ever suspect someone may be an animal hoarder, immediately contact law-enforcement officials—following up if necessary to make sure that action is taken. PETA’s report on hoarding contains more information about how to protect animals.