A source close to John Cuneo, the owner of infamous circus supplier Hawthorn Corporation, has leaked information to PETA that we hope will convince the U.S. Department of Agriculture (USDA) to revoke Hawthorn’s exhibitor license permanently and to seek criminal charges against Cuneo as well as Lance Ramos, an unlicensed exhibitor who has repeatedly abused and neglected exotic animals and who, according to the whistleblower’s testimony, was unlawfully hired by Hawthorn. 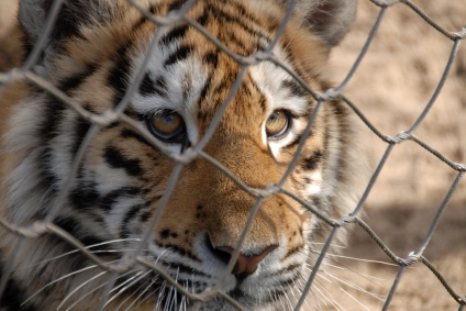 Hawthorn breeds tigers and leases them to circuses around the world. It has provided Shrine circuses, Cole Bros. Circus, Jordan World Circus, George Carden Circus, Hanneford Circus, and Tarzan Zerbini Circus with tigers. The whistleblower gave PETA firsthand information about pervasive abuse and neglect of animals and apparent violations of federal law, including the following:

These allegations are just the latest in Hawthorn’s long, sordid history of cruelty to animals. Please join PETA in asking the USDA to take the appropriate disciplinary action, including revoking Hawthorn’s license to exhibit animals.