The pomp and pageantry of the Westminster dog show is over. Many of the dogs have been shipped back to their breeders after living in their handlers’ crates for years. Now, the females will be forced to bear litter after litter of puppies, only to have them all taken away to be sold. Every year following Westminster, there is a rush to buy dogs of the winning breed and other “designer dogs” who appeared on the screen. And breeders and pet stores are happy to oblige, taking as many orders as they can get and raking in money hand over fist.

In an industry in which dogs are viewed as commodities, their health and well-being matter less than the bottom line. To minimize expenses, breeders and puppy mills commonly warehouse breeder dogs in tiny, filthy cages; deny them veterinary care; and repeatedly get them pregnant, until the dogs can no longer produce puppies—at which point, they are often auctioned off, discarded at shelters, or killed. 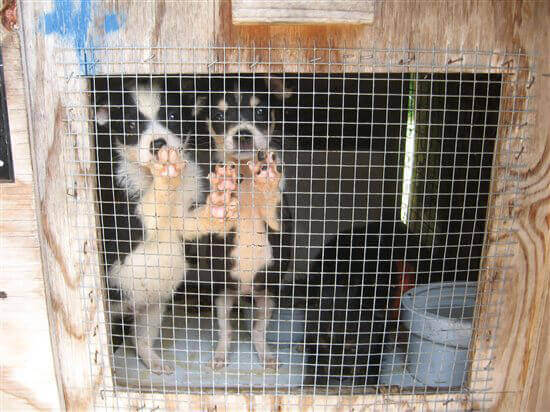 Just this month, in yet another horror story, authorities raided a breeder and dog-show judge’s home and found 38 dogs living in small crates that were caked with feces and fur. The cages were piled on top of one another in the dark basement, and a radio blared to drown out the sound of barking. Many of the dogs were malnourished and suffering from eye diseases and severe periodontal disease. They were so sick that 13 of them had to be euthanized immediately.

People who buy dogs from breeders or pet stores keep these puppy pimps in business. They also kill a shelter dog’s chance at a home. Please, urge anyone you know who is considering buying a dog to adopt instead.