“Weird Al” Yankovic’s hilarious “Mandatory” tour is selling out across the country this summer and will wrap up at Radio City Music Hall on September 24. A longtime vegetarian, the parody artist and star of IFC’s Comedy Bang! Bang! has given PETA a pair of VIP tickets to any of his concerts—including a meet and greet—to auction off online. You can bid here.

PETA recently caught up with Weird Al before his raucous show at the Portsmouth Pavilion near PETA’s headquarters in Norfolk, Virginia. How does the 56-year-old comic icon power through such an intense physical performance night after night? The sautéed tofu backstage gave us a clue.

One of your biggest hits is “Eat It,” a satire on gluttony to the tune of “Beat It.” What do you eat?

My favorite food is mangosteen, an exotic fruit only grown in certain parts of the world. But I haven’t had it since my honeymoon in 2001 in Bali. I love Indian food and seek that out on the road—and Italian, Mexican, and Thai food. It’s a little overwhelming for me to go to a vegan restaurant, because I can literally have anything on the menu!

We brought you this gift—a can of vegetarian haggis direct from Scotland. I don’t know how they made a soy version of animal innards contained in a soy stomach, but we wanted to give you something to remember us by.

Wow. This is too special to eat, but I’ll definitely keep it on my shelf. And I’m Instagramming it immediately! I find things like this fascinating, but I’m not much into mock meats. I prefer vegetables, rice, pasta, and grains. As you can see from the spread here in the dressing room, I thrive on fresh fruits, juices, hummus, and chips and salsa. 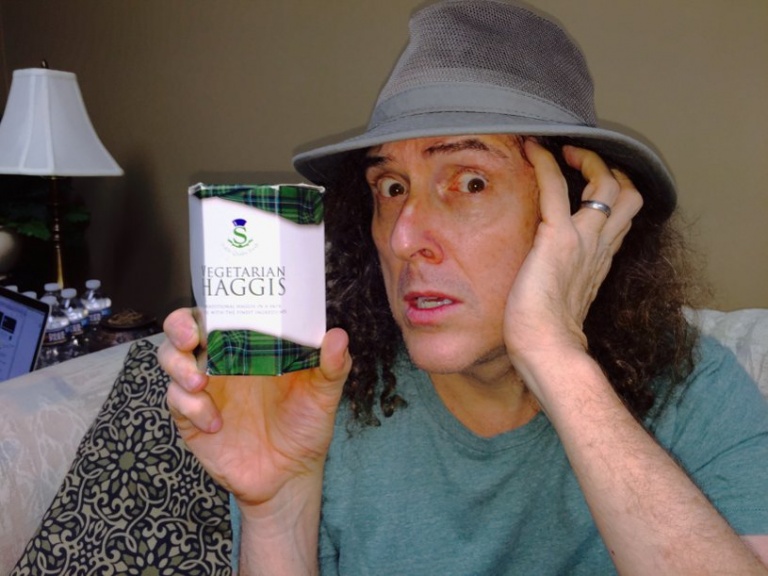 When did you stop eating meat?

I became a vegetarian in the early ’90s. A friend gave me Diet for a New America, and at that point, I’d mostly stopped eating red meat, but the book made such valid points about why eliminating all meat made sense, so at the end, I thought, “I’ve got to do this.” It’s become much easier. Now I can eat virtually anywhere and find something on the menu. When I first started touring, stopping at a truck stop, your options were usually applesauce or toast, not a lot of great choices. Now, everywhere we go, local caterers know there are vegetarians on the tour, and they accommodate us very well.

Is Weird Al coming to a town near you? Bid on the pair of VIP tickets to benefit PETA.