D.C.’s Washington Humane Society gave away rabbits for pennies recently. As one commenter who read the disturbing news article posted, “I hope this is … [an] April Fool’s joke.” Sadly, it wasn’t. The animals were being adopted out for “29 cents in honor of the Leap Year.” 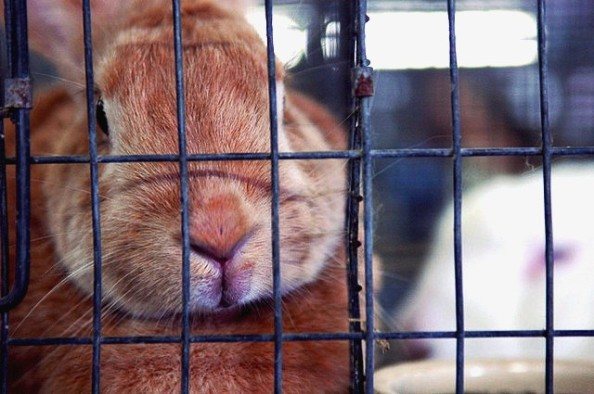 Selling animals for less than the price of a pack of gum devalues them and encourages spur-of-the-moment adoptions by people who have not considered whether or not they are ready to invest the substantial amount of money and care that animals need. It would have been easy for people to acquire the cheap bunnies to give as Easter gifts to children, so many will likely join the countless other neglected cast-off Easter bunnies and chicks who live in cramped cages in backyards or are abandoned outdoors, where they cannot survive and die painfully.

Other people’s intentions could be much more sinister: Virtually free rabbits are often sought after by those looking for cheap snake food, dogfighting bait, and laboratory victims—even by those wanting to make rabbit stew.

In response to pressure from “no-kill” advocates like Nathan Winograd and well-meaning members of the public, more and more animal shelters are stooping to these kinds of cheap and dangerous gimmicks to reduce their euthanasia statistics, even when it means shoving animals out the door without regard for each individual animal’s well-being and safety. But if the number in the “adopted” column represents animals who suffered miserable fates and died at the hands of cruel or irresponsible people who have no idea what a rabbit needs, feels, or wants, that number starts to look pretty ugly.