We’ve told you before how cats and ferrets suffer in archaic training courses at Washington University in St. Louis. Now, we’ve obtained a photo of the miserable living conditions for a monkey named George, who is also confined to this facility: 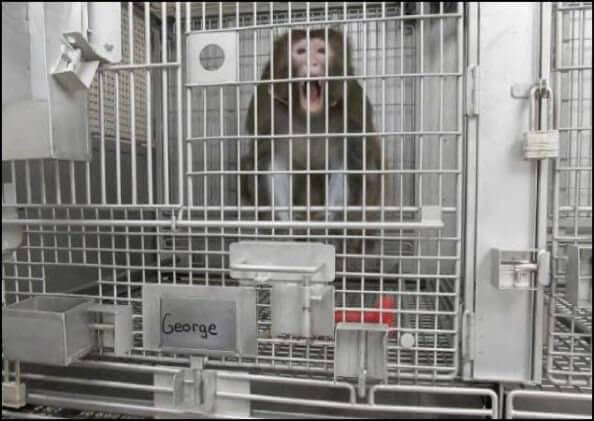 Information on who is experimenting on George was not released, but we wonder if it might have been Dora Angelaki, who has been crowned Vivisector of the Month for the month of June. Angelaki, who recently left Washington University to become chair of the neuroscience department at Baylor College of Medicine in Texas, drills screws into monkeys’ skulls and implants a “head ring,” which attaches to an apparatus to control the animals’ heads. She also implants coils into their eyes and electrodes into their ears before strapping the monkeys to a chair designed to immobilize their bodies as they are spun and shaken so that Angelaki can observe their ability to track a target. In some cases, she damages parts of the monkeys’ brains first. Angelaki has received more than $18 million in federal tax money for her primate experiments.

How You Can Help Animals in Laboratories

While Angelaki has left Washington University, there are still animals there who need your help. Please urge the school to end the use of animals in cruel and archaic intubation training exercises and replace them with modern, effective teaching methods.