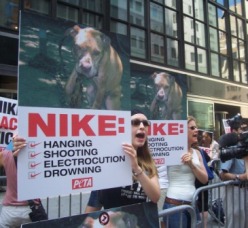 Following PETA protests outside Niketown stores and countless calls and emails to the company asking that they cut ties with Michael Vick in light of horrific allegations of his involvement with dogfighting rings, Nike has released the following statement:

“Nike has suspended Michael Vick’s contract without pay, and will not sell any more Michael Vick product at Nike-owned retail at this time.”

As a result, we have called off our planned protests outside Nike stores around the country. Thanks to everyone who wrote to the company about this issue or attended the demonstrations, and thanks to Nike for doing the right thing by ending its association with someone accused of torture.

Reebok has also made the decision to stop sales of Michael Vick apparel, stating:

“While we respect the legal process we find the allegations against Mr. Vick too disturbing to ignore, therefore, we have decided to immediately suspend selling Vick NFL product, both at retail and online through the Reebok website.”

This is great news for anyone who is concerned about cruelty to animals, and we hope that it sends a strong message to the NFL that they need to do the same thing and suspend Michael Vick immediately, pending the outcome of this case. To send a message to the NFL asking them to get on with that, please click here.