Yesterday, after five years of campaigning and thanks in large part to thousands of calls and e-mails from PETA supporters to state legislators, Connecticut has overwhelmingly passed a dissection-choice bill that will allow students to opt out of participating in or watching classroom animal dissections and instead be provided with humane non-animal learning methods, such as realistic models and interactive computer programs. 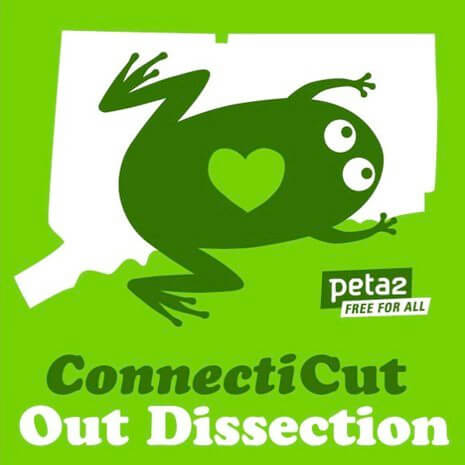 The approximately 10 million animals killed for dissection each year may be caught in the wild, as in the case of frogs—which jeopardizes ecosystems—or be obtained from slaughterhouses, as in the case of fetal pigs, who are cut from their recently killed mothers’ wombs. Cats are often obtained from biological supply companies and dealers, who may buy them from animal shelters or even steal the animals right out of their own yards.

Not only are modern alternatives to dissection more humane, they are also safer (no toxic formaldehyde or dangerous tools), less expensive, and more effective (studies have shown that students who use non-animal methods do better on tests than their peers who dissect). Best of all, they teach kids another important lesson at the same time: respect for life.

Connecticut’s dissection-choice bill now heads to Gov. Dannel Malloy’s desk to be signed into law and will be effective starting on July 1.

If you’re a student in Connecticut, be sure to let your science teacher know that you refuse to cut up dead animals and want to use a humane method instead. In addition to Connecticut, more than 20 other states as well as scores of school districts and colleges have enacted laws or policies allowing students to opt out of dissection. For a complete list, visit peta2.com.