After PETA released our first-in-the-world undercover investigation into the alpaca-wool industry, ascena retail group has banned alpaca wool and will fully eliminate the material from its product lines going forward! This huge victory will prevent many alpacas from being roughly shorn. The company previously banned mohair and angora after PETA exposed the cruel industries that exploit goats and rabbits for their hair. All of ascena’s brands—including Ann Taylor, LOFT, Lou & Grey, and Lane Bryant—are excluding alpaca wool from future collections. 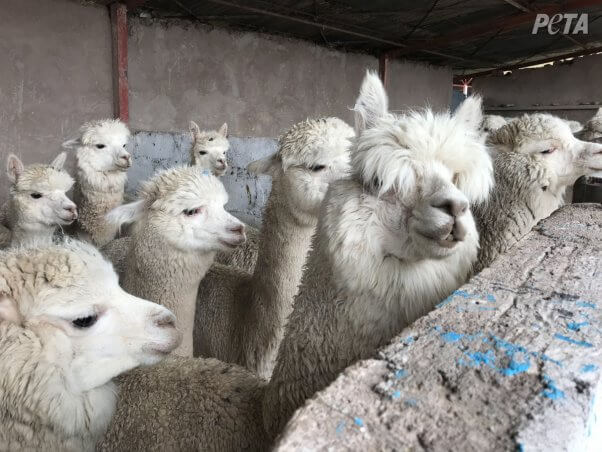 Able to hear, smell, and see what other alpacas were enduring, these animals huddled together in fear, as observed by PETA’s investigators.

Why Did ascena Say Goodbye to Alpaca Wool?

ascena joins a growing list of retailers that have banned alpaca wool after seeing PETA’s undercover footage of rampant abuse in Peru, the world’s top alpaca-wool producer. Workers at the largest privately owned alpaca farm slammed pregnant alpacas onto tables, causing many to vomit and cry out in fear. The workers strapped these sensitive beings to a device resembling a medieval torture rack before stealing their fleece, leaving some bleeding after crudely shearing them.

And the cruelty doesn’t end there. When their fleece is no longer wanted, alpacas aren’t left in peace to roam fields or spend time with their families—instead, they’re slaughtered.

Alpacas feel love, anxiety, and sadness, just like humans. They even hum when they’re curious or content. Baby alpacas, known as cria, stay with their mothers for at least six months in their natural habitat. They deserve to spend their days eating herbs and cuddling with their young, not being stretched out on a restraining device or thrown around for fashion.

Your Voice Helps Keep Baby Alpacas With Their Mothers

PETA’s undercover investigation—and more than 100,000 signatures from supporters like you—persuaded major retailers to drop alpaca wool, a product of fear. Valentino and ESPRIT are just a couple of the high-end designers that banned alpaca wool, in a move that spares the lives of gentle animals. But some companies still profit from the pain and torment of alpacas in the name of fashion. 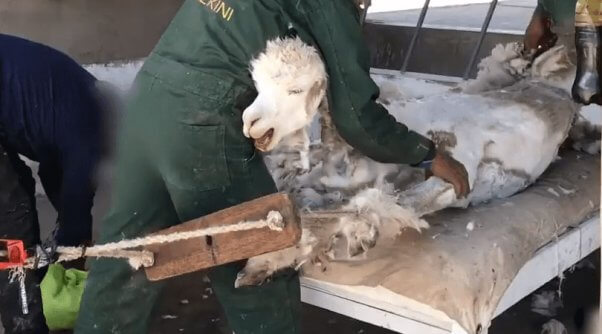