Animal advocates, it’s time to break out the bubbly. After pressure from PETA and tens of thousands of our members and supporters, NBC has pulled the plug on its cruel show, Animal Practice. Here’s the celebration in progress at PETA’s Bob Barker Building in L.A.: 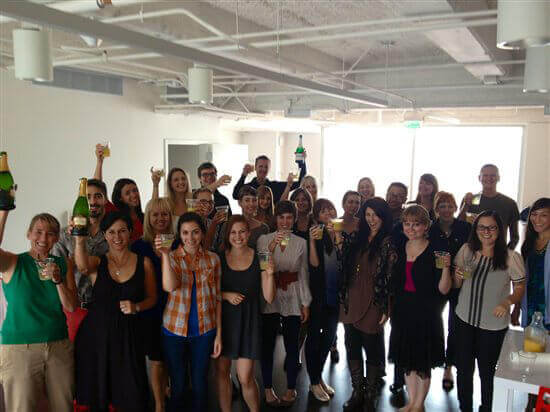 The only thing funny about this “sitcom” was its laughable ratings. By not tuning in, viewers told NBC that they weren’t interested in watching animals dressed up and made to perform cheap tricks—animals who had been torn away from their mothers as babies and subjected to cruel training methods and unnatural living conditions.

Even before the first episode aired, PETA showed NBC that if the network wanted to broadcast cruelty, it was going to have a rocky road ahead of it. We wrote to NBC and the show’s producers and explained how wild animals suffer in the entertainment industry. We kept the heat on by asking advertisers to pull their support, organizing demonstrations, sending an urgent action alert to our members and supporters, and enlisting primate experts to speak out about how the portrayal of monkeys as “pets” leads irresponsible people to acquire them on a whim. And it worked.

NBC will air the three remaining episodes of Animal Practice that have already been filmed. Then viewers can rest assured that cruelty to animals won’t be part of the Wednesday night TV lineup.