It’s a huge day for goats! Following talks with PETA, Victoria’s Secret has just confirmed that it’s banning cashmere from its source materials. The brand, which has made many positive changes for animals over the past few years, is taking a stand by dropping cashmere, which is a product of violence against goats. It joins Columbia Sportswear, Overstock.com, ASOS, and many other brands in doing so.

This isn’t the first time Victoria’s Secret has responded to PETA’s input: After hearing from us, the chain struck angora rabbit fur from its catalog in 2013 and alpaca fleece in 2021.

Cashmere Is Horrible for Goats

In the cashmere industry, workers routinely terrorize gentle goats and steal their hair. A PETA Asia investigation found that goats exploited for cashmere in China and Mongolia endured terrifying hair removal and neglect as well as agonizing, protracted deaths in filthy slaughterhouses.

PETA Exposé Reveals Cruelty Behind Your Cashmere Sweater from Official PETA on Vimeo.

During hair removal, as seen and documented by PETA Asia’s investigators, workers violently shoved terrified goats to the ground, pinned them down, and tore their hair out with sharp metal picks. The goats, confused and crying out in pain, were afforded no comfort. Bloodied goats weren’t even given any wound care: One worker seen by PETA Asia’s investigators simply poured rice wine into an animal’s open wound.

Goats in the cashmere industry are exploited for their entire lives. After workers rob them of their natural insulation, they face death by exposure. In addition, the grasslands where they graze are being depleted faster than they can regenerate, in large part due to global sales of cashmere. If the goats don’t die from exposure during the few agonizing years when they produce the most hair, they’re viciously killed. Workers hit them on the head with hammers and slit their throats. The animals bleed to death, often while still conscious, in full view of their terrified herdmates. Their flesh is then sold as meat. 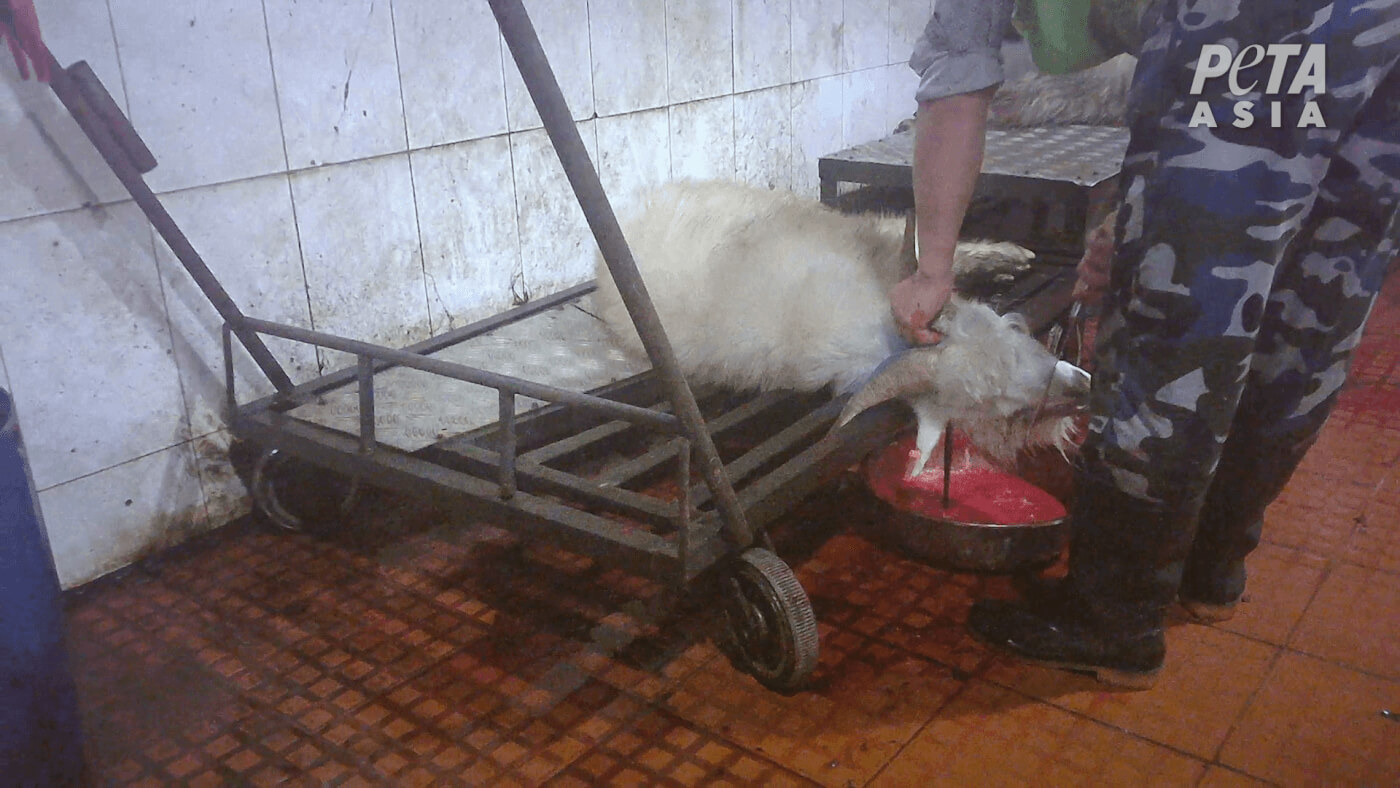 Ninety percent of the world’s cashmere supply comes from Chinese and Mongolian farms like the ones visited during PETA Asia’s investigation.

Victoria’s Secret is taking the correct approach by banning cashmere from its supply chain. Some brands choose to “humane wash” their products and sully their reputation by certifying their items according to the “Good Cashmere Standard” (GCS), a sham certification that means nothing when it comes to the suffering of goats.

The GCS has plenty of intentional oversights, including allowing blunt-force trauma killings of goat kids and indiscriminate slaughter practices, as well as requiring only 10% of “certified” farms to be audited just once a year. “Good” cashmere isn’t even regulated for its notoriously devastating environmental impact. In addition, certified farms are allowed to produce both GCS-certified cashmere and noncertified cashmere, undercutting the entire standard. It’s clear that cashmere producers’ only interest in animal welfare involves deceiving consumers to make a quick buck—so Victoria’s Secret’s refusal to sell cashmere speaks volumes about its commitment to both animals and shoppers.

H&M betrayed animals and its own customers by quietly reversing its bans on cashmere and mohair, choosing to hide behind the GCS and the “Responsible Mohair Standard,” a similarly crummy certification that provides no real protection for goats used for fashion.

Please help goats today by urging H&M to reinstate its bans on cashmere and mohair, instead of trying to fool its customers with misleading labels.