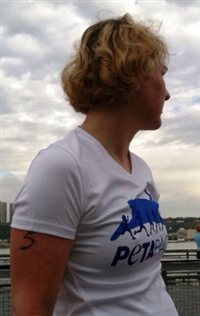 When vegan swimmer and PETA Foundation staffer Becky Fenson set her mind to tackling the exhilarating 10K international Little Red Lighthouse Swim on New York’s Hudson River, she wasn’t just doing it for herself, she was also raising awareness about animal rights and the benefits of a vegan diet.

Determined to make a good showing for PETA, Becky was off like a shot at the start. But much to her fellow swimmers’ shock, she wasn’t swimming freestyle—the stroke typically used in open-water races—along with everyone else. Becky was swimming the most difficult stroke, the butterfly—something no one else had ever done in that race—and she was keeping pace with her competitors.

Before the start of the race, Becky used her conversation-starting PETA Pack shirt to reveal her “secret weapon”—her vegan diet—to the other swimmers. She joked that, as meat-eaters, they had an advantage over her in contending with the Hudson’s nose-wrinklingly polluted waters: They’re used to ingesting fecal matter.

Becky raised awareness about animal rights just by doing what she loves. To learn how you can use your hobbies to help animals, check out PETA President Ingrid E. Newkirk’s advice in “Newkirk Nuggets.”