The people have spoken, and here’s the winning caption for last week’s 10% Wool comic contest! We’re in the process of contacting the winner, so be sure to check your in-box!

Imagine Skip’s and Suzie’s surprise when they discovered they’d BOTH kissed the frog in hopes of finding their prince!

And now we’re holding a new 10% Wool comic “Trump the Artist” contest! Here’s how it works: Read Jeff’s comic below, and see if you can come up with a better caption than the artist himself. Submit your caption for this week’s comic in the comment section below. We’ll choose three user-submitted captions that best complement the strip and let YOU, the readers, vote on them to let us know who you think should be crowned victor. Our winner will walk away with a black PETA logo standard T-shirt. 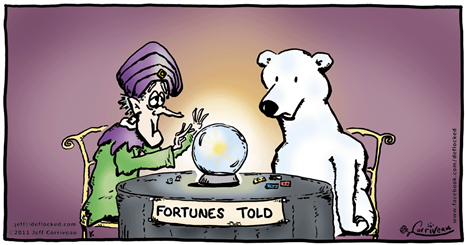 I wouldn’t lock myself into any long-term phone plans.

Don’t forget to check out the archive of past 10% Wool comic strips, and get more information on the series and the writer. Join the flock and become a fan of Jeff’s nationally syndicated comic strip, DeFlocked.

The entry round ends at 12 noon on October 11, 2011, and voting will start on October 13, 2011. Voting will end on October 19, 2011, and we’ll announce the winner and showcase the winning caption in a blog post on October 20, 2011. Be sure to read our privacy policy and terms and conditions, as you’re agreeing to both by commenting. No purchase necessary. Void where prohibited by law. Good luck!