Students at the University of Wisconsin–Madison (UW) likely had no idea that as they made their way to class, they were passing by a laboratory in which cats, exactly like the ones many of the students would return home to, were being tormented and killed in gruesome experiments. But PETA set out to show the students exactly what was going on behind closed doors on their campus and to enlist their support to get the experiments stopped. 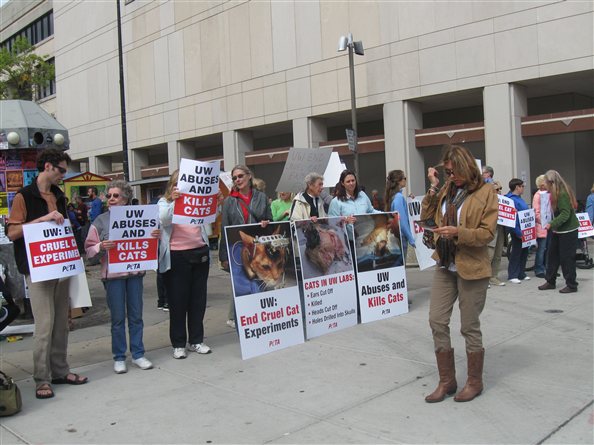 UW experimenters did not want information about their cruel sound localization experiments on cats to be released, and they fought PETA for more than three years to try to keep the information under wraps. But we sued the school for release of the disturbing pictures taken of the laboratory’s feline victims—and got the photos.

PETA members marched onto campus holding signs emblazoned with the graphic images of Double Trouble, one of the many cats UW abused. UW faculty drilled holes into Double Trouble’s head, screwed a steel post to her skull, implanted electrodes in her brain, and put coils in her eyes. They dripped toxic chemicals into her ears to deafen her, then implanted devices in both ears. During at least two of these surgeries, Double Trouble’s anesthesia was inadequate, and she woke up or was conscious and likely in pain.

Experimenters immobilized Double Trouble’s head and made her try to locate sounds coming from different directions. They starved her for days in order to make her cooperate during these experiments in exchange for a piece of food. When the experimenters were done using Double Trouble, they killed and decapitated her.

And after all the pain and trauma that Double Trouble was subjected to, the experimenters admitted that the project was a failure. Meanwhile, institutions around the world study how the brain locates sounds by using advanced methods with human volunteers.

Many UW students signed PETA’s petition asking the National Institutes of Health to stop giving the school taxpayer money to fund these cruel experiments. You can, too.