I like to joke that my rescued greyhound, Jasper, is like a canine Barbie doll. He has an outfit for every occasion: two fleece jackets, a lightweight winter coat, a heavyweight winter coat, a raincoat, and even pajamas. I sometimes get ribbed by friends about Jasper’s extensive wardrobe, but greyhounds, like other short-coated dogs, are extremely sensitive to the cold.

Unfortunately, not all animals are as well-outfitted to withstand winter weather as Jasper is. PETA’s Community Animal Project fieldworkers encounter animals all winter long who are suffering outdoors. Dogs are often tied up outside 24 hours a day, sometimes with nothing more than a card table, a plastic carrier, or an overturned trashcan for shelter. Some dogs have no shelter whatsoever, even in freezing temperatures and blinding snowstorms.

One example of the latter is Noel, a starving pit-bull mix who was found by PETA fieldworkers tethered to the trunk of a holly bush and shivering violently in the December cold. Noel had no shelter, no water, and no food unless you count the few pieces of kibble scattered on the ground, out of her reach. PETA rushed her to a vet, who estimated that she was roughly half her healthy weight.

Sadly, Noel’s case is not unique. In December, PETA assisted with the rescue of a dog in Nebraska who had been left outside during a snowstorm and had icicles dripping from his face. 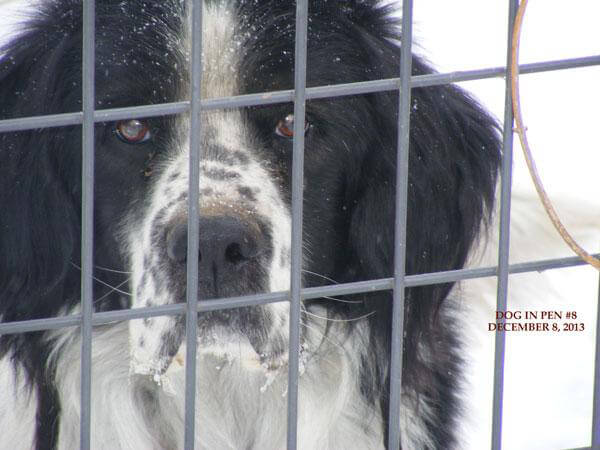 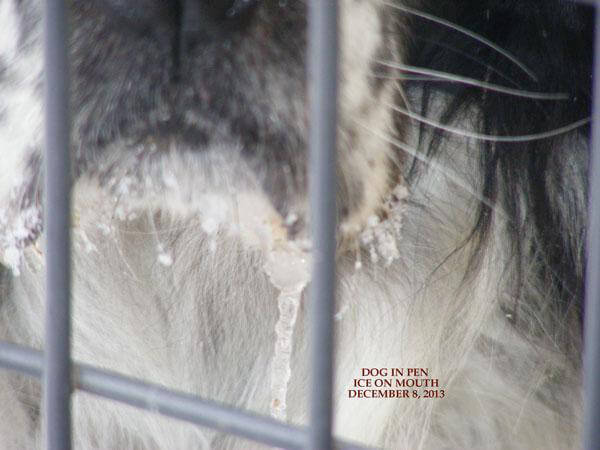 That same month, two dogs froze to death after being dumped outside the Terre Haute, Indiana, animal shelter after hours during a cold snap.

A stray cat named Trooper was found frozen to a driveway in Newfoundland after apparently being hit by a car and breaking his hip. His body temperature was so low that it didn’t register on a thermometer. His tail and one leg had to be amputated because of frostbite.

A kitten dubbed Rocky Balboa by Sioux City, Iowa, shelter staff because of his fighting spirit was found near death, frozen to a garbage can.

Two dead pit bulls were found frozen to the ground—one in Memphis, Tennessee, and the other in Philadelphia—after neighbors called police. “It makes me want to cry. I hate animal cruelty. … [I]t hurts my heart,” said one neighbor. 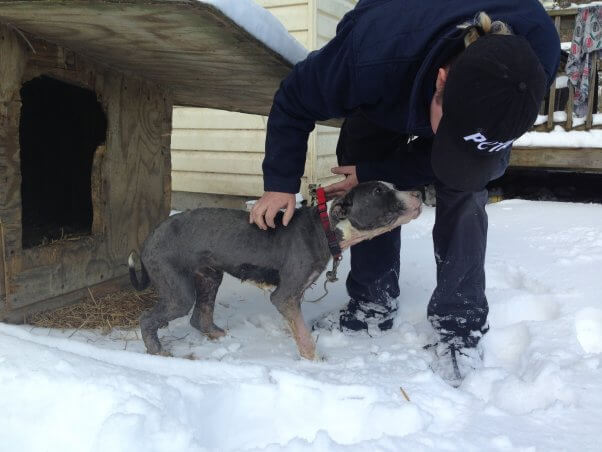 During a recent winter storm, fieldworkers rushed out to aid “backyard dogs” in rural North Carolina and came across this sickly, emaciated dog who was on death’s door, reeked of infection, and would have surely succumbed to the bitterly cold temperatures. Her owner agreed to let our fieldworkers take her so that she would no longer have to suffer on a chain at the mercy of the elements.

Dogs may have fur coats, but they are not immune to the cold any more than a person wearing a coat would be if he or she were to sit outside on the frozen ground all day. Many dogs, including short-haired breeds such as pointers and pit bulls, young or elderly dogs, and small dogs such as Chihuahuas, dachshunds, and beagles, are even less able to handle the cold than humans are. As Indianapolis animal control staffer Dawn Contos says, if it’s too cold for a human to be comfortable outside, even with a coat on, “It’s probably too cold for your dog to be outside.”

Stray, feral and “outside cats” are also at risk. One stray cat in Boston was found suffering from frostbite so severe that one of her ears fell off while she was being transported to the animal shelter.

We’re seeing cases of animals suffering & dying in cold weather all over the U.S.

Please, if you see an animal outside in this, DO SOMETHING. Bring them inside, call authorities.

Neglected and abandoned animals need our help in order to survive. Stray and feral cats should be captured and taken to a local animal shelter. If a dog is being denied adequate food, water or shelter, please alert authorities right away.

In Noel’s case, a call from a concerned neighbor saved her life, and her abusive owner was charged and banned from ever owning animals again. Today, Noel is thriving in her new home. She may not have quite as many coats as Jasper has, but she never has to worry about being left out in the cold again.

Will you be an “angel” for a lonely dog chained outdoors? When you sponsor a doghouse for a dog in need, you’ll make a difference in the life of a neglected “outdoor dog.”

A version of this article was posted previously on the Modesto Bee.