You don’t have to be a Rhodes Scholar to know that all mammals need water to survive, yet this basic biology principle is apparently lost on the clever folks at Harvard. For the second time in three months, a monkey has died of dehydration at the Ivy League institution: On Sunday, an elderly cotton-top tamarin was euthanized at Harvard Medical School (HMS) after it was discovered that the monkey’s cage had no water bottle, an inexcusable oversight that led the university to suspend new experiments at its New England Primate Research Center (NEPRC).

The monkey’s death came on the same day that the U.S. Department of Agriculture (USDA) made public an inspection report that revealed three other incidents involving the neglectful endangerment of monkeys at the facility in the past three months, including another monkey’s death. This recent series of deaths has prompted PETA to call on the National Institutes of Health (NIH) to suspend all funding to HMS and NEPRC and to demand a refund of any grant money spent on activity that violated federal animal protection laws, which is required by federal grant guidelines. 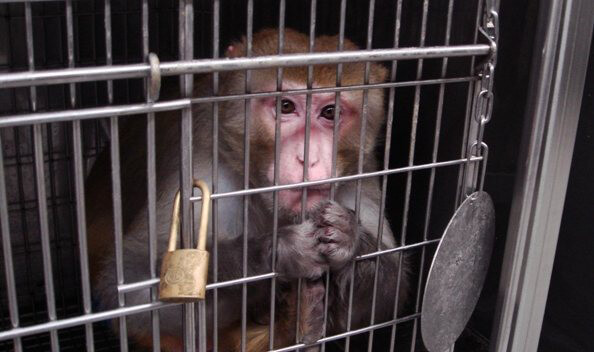 Milo was imprisoned at the Oregon National Primate Research Center (ONPRC), a facility where PETA conducted a shocking undercover investigation

A History of Violations

The USDA has cited HMS and NEPRC for more than 20 violations of the Animal Welfare Act during the past two years, including the following incidents involving serious injuries and deaths:

What PETA is asking for isn’t unprecedented. Other universities, including the University of Connecticut and the University of Michigan, have had to return thousands of dollars in grant money after PETA and others uncovered animal welfare violations. After all, it seems only reasonable that our hard-earned tax dollars shouldn’t be paying for activity that violates the law.

While the recent deaths of monkeys at Harvard appear to have resulted from carelessness, HMS and NEPRC confine 2,300 other primates and deliberately commit unspeakable horrors against them, such as drilling holes into their skulls and subjecting them to cocaine addiction experiments. Ask the NIH to stop funding this cruelty at Harvard and elsewhere.