To look at 5-month-old siblings Bronson and Felix now, it’s hard to picture them as the sickly newborn kittens a PETA investigator discovered at Caboodle Ranch, Inc., a no-kill hellhole that was raided this week after masquerading as a “cat rescue sanctuary.”

On Monday, based on evidence that PETA gathered during a five-month undercover investigation, officials in Madison County, Florida, began seizing hundreds of cats from Caboodle’s moldy trailers and ammonia-ridden sheds and arrested founder and operator Craig Grant on cruelty-to-animals and other charges, including two felonies. The seized cats are finally receiving the veterinary care that they had been denied at Caboodle, but the filthy conditions and rampant disease there had already cost many cats their lives, including Bronson’s and Felix’s littermate. 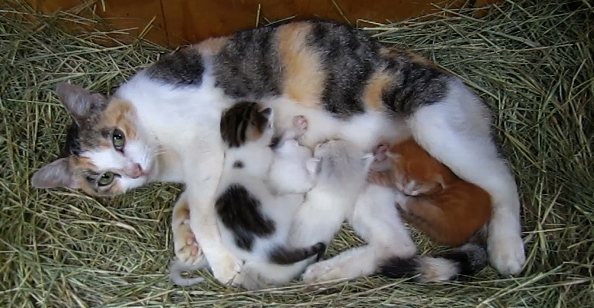 PETA’s investigator had discovered a tiny white kitten all alone, with eyes so encrusted with dried discharge that they wouldn’t open. The investigator took the kitten to Grant and pointed out the animal’s obvious illness. Instead of providing the kitten with veterinary care, Grant rubbed a Clorox wipe across the kitten’s eyes and rubbed and picked at them roughly with his hands. He told the investigator to put the kitten with a cat named Cali, who had given birth at Caboodle to kittens our investigator named Bronson, Felix, and Luna. Within a month, the little white kitten had died at Caboodle, apparently of an untreated upper respiratory infection.

Desperate to save the other three kittens, the investigator asked Grant for them, and he gave them to her. Our investigator took them straight to a veterinary hospital. There, the kittens were started on medication for upper respiratory infections and began their recovery from dehydration. But just two days later, little Luna was struggling to breathe, and the investigator rushed her to an emergency animal hospital. As a result of the neglect Luna had suffered at Caboodle, she was now battling anemia, hypoglycemia, and hypothermia. Despite shots of dextrose to raise her blood sugar and heating pads to stave off the hypothermia, little Luna could not overcome the hand that Caboodle and Grant had dealt her and, at a veterinarian’s recommendation, was euthanized.

It was a rough road for Bronson and Felix and for the investigator who fostered them on their long path to recovery. But after months of intensive veterinary care, both miracle cats are now happy and healthy and are ready for adoption by a family who has the time and energy to give them the love and care that they need and deserve. Are you on the East Coast and ready to give Bronson and Felix a home? Apply to [email protected]. 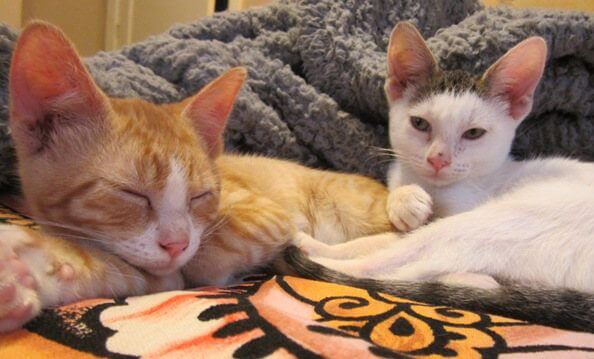 Bronson and Felix finally get to experience the kind of life that every cat deserves.

These cats’ sad stories are doomed to be repeated time and time again if a bill in the Florida legislature becomes law. Under the misleadingly named “Animal Rescue Act,” reputable open-admission animal shelters would be forced to hand animals over to self-proclaimed “rescues” like Caboodle. Don’t let this dangerous bill pass.