Progress! The infamously cruel Arkansas “turkey drop,” part of the Yellville Turkey Trot festival has been, in effect, canceled this year, thanks to the official new sponsors of the October event. The Mid-Marion County Rotary Club has voted for kindness by refusing to support throwing live turkeys from airborne planes and rooftops. 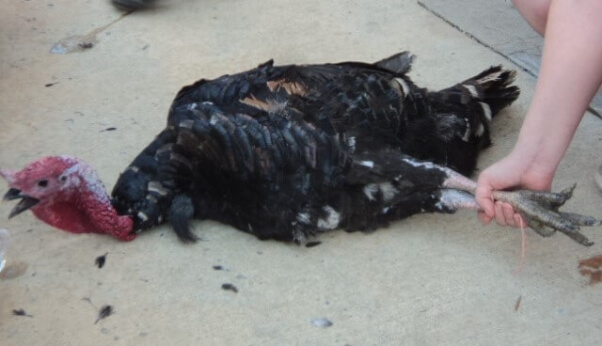 Earlier this month, the local chamber of commerce, which sponsored the festival for decades, said that it would no longer do so. On Monday, April 23, the Mid-Marion County Rotary Club voted and agreed to serve as the new sponsor, but with one condition: “[N]o live turkeys are on the premises or dropped from airplanes.”

The Yellville spectacle—which used aircraft to torment animals for tawdry human entertainment—caught the attention of lawmakers who are working to put a stop to such violent, misguided practices. Rep. Dina Titus has PETA’s gratitude for her wonderful efforts to end the use of aircraft for events like this. Watch her amazing testimony.

Two turkeys died in the 2016 event, and in 2017, PETA rescued four of them—including one who was wounded after having been hurled from a courthouse roof and another who was trussed up and tossed from a stage onto concrete, where he lay panting as spectators walked over him. All birds who were rescued by PETA are now living out their days in peace. Over the years, hundreds of thousands of people from around the world, including many in Arkansas, have spoken out against the “turkey drop,” and we hope the club’s new sponsorship relegates this cruelty to the history books.