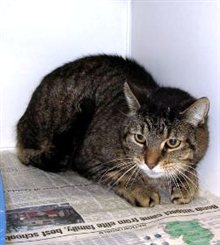 He was a pretty, healthy, brown tabby cat when his guardians took him to a Michigan animal shelter in the hope of finding him a new home. But a heartless shelter director, a shady animal dealer, and a university hell-bent on abusing animals in crude and painful medical training exercises took away his chance at a happy ending.

Knowing full well that he would end up in a lab, the staff at Gratiot County Animal Shelter turned the cat over to notorious Class B animal dealer R&R Research, which in turn sold him to the University of Michigan (U-M). There, he was given the ID number 8269 and tormented in Survival Flight training labs for nurses by having hard plastic tubes repeatedly shoved down his delicate windpipe. A few days later, when U-M was done abusing 8269, they killed him. Another cat who was subjected to this cruel intubation laboratory, 8312, had been obtained from someone who gave her away “free to a good home.” The cat was illegally acquired by R&R before being sold to U-M.

The stories of 8269 and the other cats killed by U-M were uncovered when PETA obtained records from Gratiot County and U-M. They reveal that U-M officials—including the director of the Survival Flight program—have shamelessly lied to the public by repeatedly stating in a newspaper opinion column, comments to the media, and official statements that the cats used in the archaic Survival Flight lab are always adopted out afterward.

While we were shocked to learn about U-M’s illicit relationship with one of the most despicable animal dealers in the country and to discover that U-M has been blatantly lying about the fate of the cats, it really shouldn’t have come as any surprise. U-M officials have been misleadingly claiming for a year that modern human-patient simulators can’t replace the cat laboratories, even though these simulators are already used in the place of animals to teach intubation to doctors and nurses in other courses at U-M.

You can help prevent more cats from being betrayed like 8269 by clicking here to e-mail U-M officials and demanding that they replace the use of cats in these labs with the superior human-patient simulators that the school already owns.