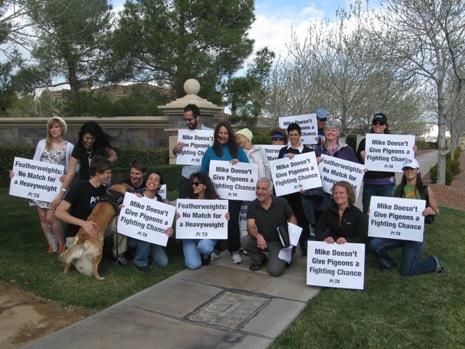 Tyson, who once claimed that his former “pet” tigers “liked” being punched in the testicles and face, has now added pigeon abuse to his résumé. Racing pigeons are forced to fly hundreds of miles in all weather extremes as they attempt to get home. The pigeons are vulnerable to both natural predators such as hawks and cruel humans who view them as “pests.” In a recent ESPN interview, Tyson said, “I try not to get too attached. That’s why I keep breeder pigeons—if a bird gets sick or dies, I can produce another one.”

Wagers are often placed on the outcome of races, which not only violates many state gambling laws but also means a grim fate for “losers.” Owners have little use for pigeons who can’t or don’t win, and they unapologetically kill slower birds by wringing their necks, gassing or drowning them, or selling the birds to live poultry markets.

Please let Animal Planet know that you won’t be tuning in to Taking On Tyson.