As I mentioned before, we’re pretty effing displeased with Denny’s restaurants at the moment, since the company has jumped into bed with Ringling Bros. and Barnum & Bailey Circus, who, in addition to being documented animal abusers, are seriously among the sleaziest bunch of people anyone could ever hope to do business with (for a little background on that claim, check out this recent article from the Huffington Post).

But yeah. The point is that Denny’s needs to find themselves another corporate partnership ASAP, and until they do, we’ll be letting them know about it on the daily. Here’s a pic from a recent demonstration in New York. Thanks to all the activists who came out! 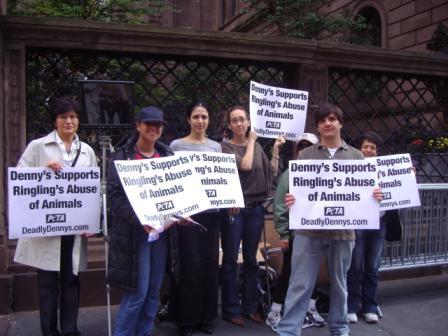