Update: Donald Trump Jr. and Eric Trump’s hideous African hunting trip is under investigation by Zimbabwean authorities. Among the potential problems noted by the Zimbabwean Conservation Task Force were the following: The brothers may have illegally used dogs to kill an endangered leopard, the South African safari firm they used was not registered to hunt in Zimbabwe and may not have been cleared by wildlife authorities, and licensing and trophy fees may not have been paid.

Authorities are also investigating the Trumps’ claims that they donated meat from the animals they killed to local villagers, as there are no villages near where the brothers hunted. If they are found to be in breach of hunting laws, the Trump brothers and officials from the safari firm could face imprisonment or a fine of up to $500,000.

Johnny Rodrigues, chairperson of the Zimbabwe Conservation Task Force, said, “This is the problem with those who … think they can come to manipulate and control people, destroy natural resources, and say ‘we came to help.’ We don’t want them here.”

The following text was originally published on March 14, 2012.

Donald Trump Jr. and Eric Trump are the targets of more media scrutiny than Barack Obama’s birth certificate after pictures surfaced online of the pair posing with wild animals they had killed on safari in Zimbabwe. Each “trophy” was procured for a fee—how macho is that?

Dressed as if to play extras in Rambo, the brothers posed for photographs, including one sick enough to make a grown man, other than a Go Daddy CEO, lose his lunch: Don holds his knife in one hand and the severed tail of an elephant he’s shot in the other. An elephant! In another photo, Eric sits atop a Cape buffalo, using the animal’s corpse as a gun and hat rack. Another photo shows both brothers standing next to a massive crocodile whom the Great White Bwana Boys no doubt had “the help” hang up by a noose from a tree branch. In a joint statement, the brothers said, “We have the utmost respect for nature and have always hunted in accordance with local laws and regulations.” If this conduct constitutes respect, I really don’t want to know what their contempt looks like. 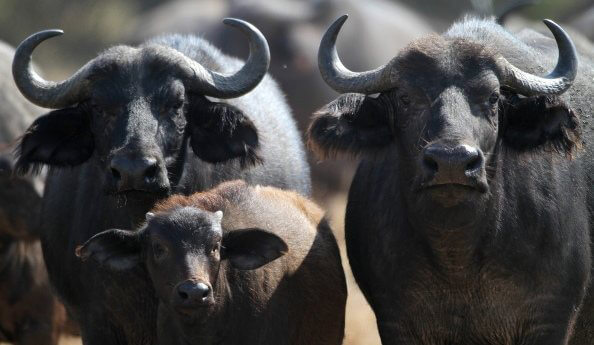