At 7 p.m. tonight, at the Paley Festival in Los Angeles, the stars and creators of Buffy the Vampire Slayer are reuniting for a panel discussion about the Buffy phenomenon and the future of the Buffyverse. If you already knew this, then you’ll probably be as excited as I am about the fact that I have, right here, a PETA Files exclusive interview with not one, but two Buffy alumni. And if you have no idea at all what I’m talking about, you need to run (do not walk) to your nearest video store, rent seasons 1 through 7 of Buffy the Vampire Slayer, and maybe stock up on food, water, and Depends on your way back so you can watch the entire show uninterrupted. I’m deadly serious here, people.

Amber Benson, who played ‘Tara’ in Buffy, is starring in the upcoming comedy Kiss the Bride, and Tom Lenk (Buffy’s “Andrew”) is currently performing with the Upright Cabaret in Los Angeles. They are both awesome and I love them. Here’s what they had to say:

When and how did you first become aware of PETA’s work?

I think it was in middle school. All I can remember was that it had something to do with the B-52’s and their “Cosmic Thing” album…

What animal issues are especially dear to your heart?

In high school I worked after hours at a Veterinary office, mopping and cleaning. It was a horrible job and I was not very good at it. And side note, I am TERRIBLY allergic to cats, so vaccuming up cat hair every day might not have been the best career choice. Anyway, there was always a constant rotation of abandoned, homeless pets in need of medical care. They were in pain a lot of time, or being nursed back to health. It was devastating. Some nights I would show up at work and they would just be gone, and I would never know if someone adopted them or if they had passed away. I never asked though…it was just too sad. So clearly pet overpopulation is an animal issue close to my heart. Thank you to PETA for continuing to spread the word about always spaying and neutering your pets.

Do you have any animals at home? If so, tell us about them.

I am currently Godfather….or should i say Dogfather and regular dogsitter to two crazy poodles. Penny and Mr. Teets. Penny belongs to my friend Elisa, and Mr. Teets to my friend Jenny. I once tried to set the two dogs up on a date. Mr. Teets immediately peed at Penny’s floor and refused to play with her. I even took them to the dog park. Penny organized a pack of small dogs into chasing her feverishly. Clearly she likes attention. Mr. Teets watched all of this from my lap and silently judged all of them. He couldn’t be bothered with their dog-like behavior. Mr. Teets may be under the impression that he’s just a very small man. I’ve attatched some pictures. Penny has recently started modeling. Doesn’t she look gorgeous in her purple Bolero coat? And teets in denim sportcoat? Coats made of cotton and acrylic fibers only of course.

What do you think of PETA’s sometimes controversial campaigns?

All publicity is good publicity. Controversy gets people talking and sends more people to your website where they can get informed.

Your fans from Buffy know Andrew as the reformed bad-guy who helps save the world from the end of the world. If you could do one thing for animals that you think would make the world a better place what would you do?

I would put this woman behind bars: 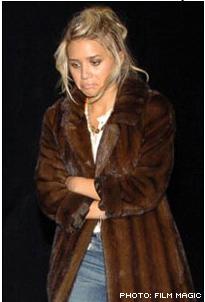 Andrew was known for being a story teller. Do you have any stories you could share with us about any animals in your life?

I have so many animal stories, I don’t know where to start. I’m actually working on my latest solo comedy show or rather solo tragi-comedy show…tentatively called Tom Lenk’s Heavy Petting Zoo. It’s a collection of hilarious and sometimes devastating stories about all of the pets I had as a kid. I grew up in an hour north of L.A. in Ventura County in an old Farmhouse complete with barn and underground storm shelter. We had soooo many pets through the years and it was so odd, because we never bought any of them…people would give us them, we’d rescue them, and a lot of times they just wandered into our yard. I had a pet duck, Peepers, that i found in my driveway in 6th grade. We never could figure out where he came from. I scooped him up and he was so tiny, fluffy and yellow. He was too young to be away from his mother or live outside, so i fashioned him a little house out of a cardboard box, complete with a warming light in case he got cold…and he stayed in my room. I named him Peepers because at night he would start peeping so loud! I think because he missed his family. 🙁 I would pick him up and hold him and he would nuzzle up against my stomach and finally go to sleep. Then I would gently put him back in his little house, and of course he would wake up again and I would repeat this process several times through the night. Finally I realized he just wanted to know that someone was there. For several weeks, I ended up sleeping on the floor next to his box with my arm dangling inside it. The mere sight of my hand inside the box calmed him for some reason. When he became an almost full sized adolescent duck, Peepers had his own fenced in yard complete with child’s swimming pool. His own puberty was mimicking my own. His once tiny high pitched “peep” was gradually and awkardly becoming a deep adolescent “quack”. And since he was an orphan and the closest thing to a duck was our dogs, his “quack” sounded a lot like a dog’s “bark.” Peepers was so sweet and tame that anyone could hold him and pet him and he would follow me around like a puppy dog…I miss that duck.

He had that power? Hmm…i’ll have to do some research.

How do you feel about the development of Andrew in the comic book? Is it strange to watch this amazing character you created take on a life of its own?

Well, to be honest I don’t know if I created him. I think the writers on the show created him. And in fact I guess I should thank actor Brad Kane who was unable to film the role of Tucker, so they created Tucker’s Brother, Andrew. Lucky me. When I first read the comicbook and saw Andrew for the first time and he was talking about Lando or something…it made me a little sad. I realized I missed him. But he seems to be doing just fine without me. 🙂

If you were the writer in what direction would you take Andrew’s character?

Maybe he starts working out a lot and I get in really great shape and I become some sort of leading man type despite my odd voice and quirky mannerisms…I mean HE, um Andrew. Yeah that’s what I meant.

What do you have coming up? Any live performances?