After a dog was painfully caught in a steel-jaw trap and a cat was nearly killed by a Conibear (body-gripping and drowning) trap in Gibsons, British Columbia, the town did the right thing and banned all steel-jaw, body-clamping, and snare traps. Gibsons Mayor Barry Janyk said he was surprised to hear that his town was the first in Canada to have such a comprehensive law, because it just seemed to make so much sense. 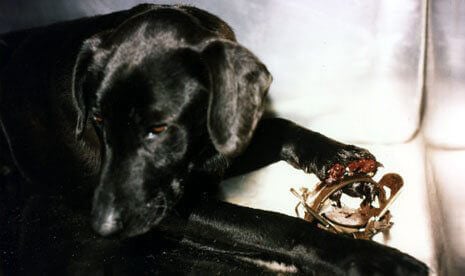 Indeed, common sense would tell us that traps and snares used to catch animals killed for their fur are all cruel. Steel-jaw traps (for which trappers use the misleading, PR-friendly term “leghold”) slam shut on an animal’s limb, instantly ripping through flesh and muscle, sometimes even bone. The jaws often cut down to the bone as the animal struggles to free the mutilated limb, sometimes reduced to having to twist or chew the leg off to escape, much like Aron Ralston, the real-life mountain climber whose story of cutting off his own arm was told in the movie 127 Hours.  The animal can struggle in excruciating pain for days before succumbing to exhaustion, exposure, dehydration, blood loss, or predation.

And it isn’t only the animals trappers target who suffer―just as in Gibsons, dogs, cats, and “non-target wildlife,” including birds, are often the victims of these indiscriminate torture devices, and because they aren’t used for their fur, they are disparagingly labeled “trash catch.”

Arizona, California, Colorado, and Washington have banned or restricted trapping. Contact PETA for information on how to  convince your legislators to ban steel-jaw traps too.