Tormenting animals under the guise of “scientific research” is apparently a profitable endeavor, a PETA review of National Institutes of Health (NIH) employees’ salary has found.

These experimenters and officials aren’t just big earners at NIH—their salaries are among the highest in the nation.

The director of NIH, the director of the National Institute of Mental Health (NIMH), and a longtime monkey experimenter are all sitting pretty at the top of the nation’s income pyramid. As they receive your tax dollars, animals in their charge suffer and die painful and preventable deaths. 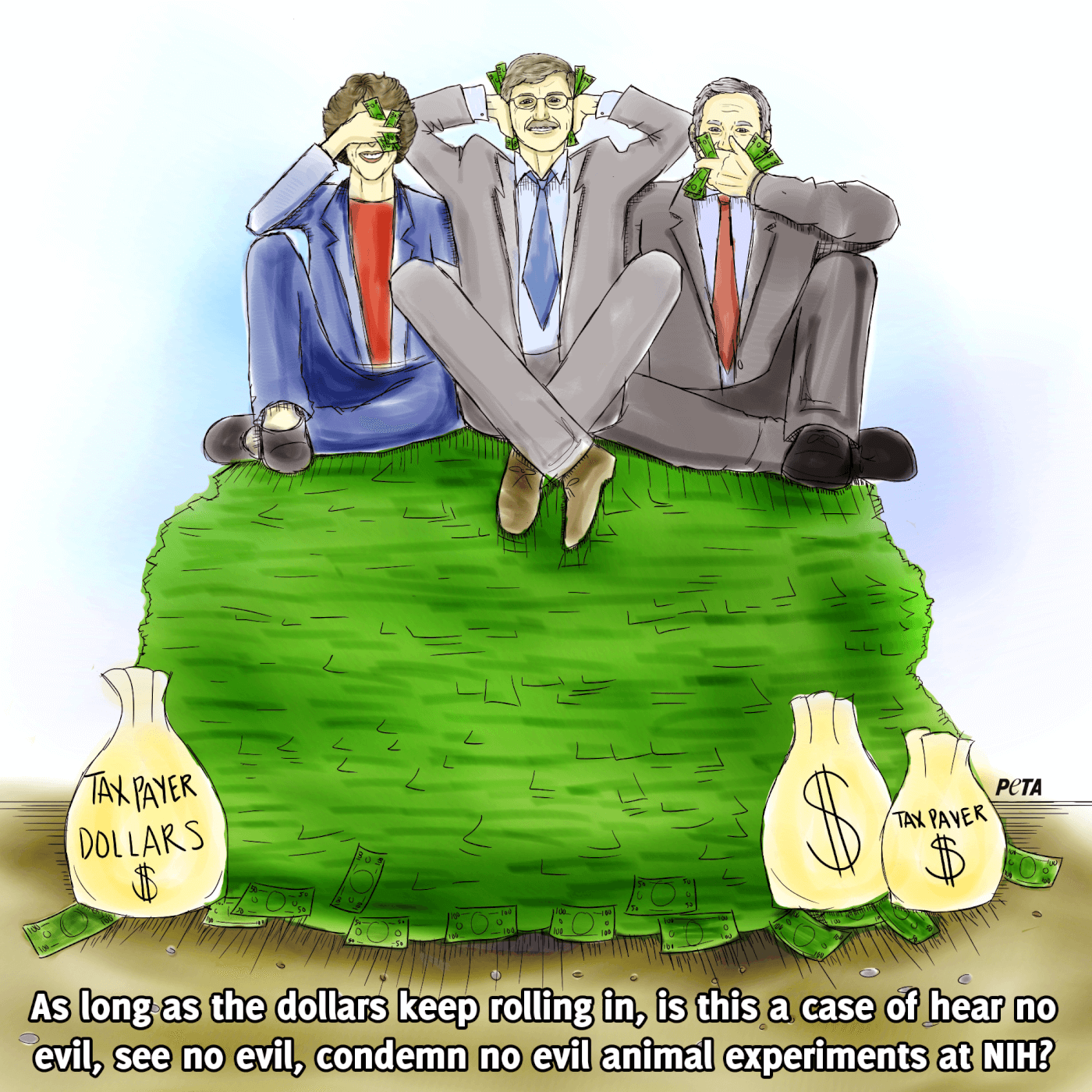 NIMH director Joshua Gordon collected a comfortable $337,000 in taxpayer money in 2019. His steep salary puts him solidly among the top 5% of earners in the U.S., as entrance to this exclusive club starts at around $309,000. His salary hasn’t dipped below $310,000 since at least 2016. He has collected more than $1 million over the last four years.

Collins, of course, oversees NIH and its $42 billion annual budget (consisting entirely of taxpayer dollars). Nearly half the agency’s research funding budget is allocated for pointless animal experimentation. Reality check: More than 90% of findings from basic research, most of which involves experiments on animals, never lead to human treatments.

In 2020, NIH squandered more than $17.6 billion on animal experiments. That’s an epic failure and a colossal waste of money.

Elisabeth Murray, the NIMH experimenter who torments brain-damaged monkeys with fake snakes and spiders, walked away with $245,000 in 2019. She has earned no less than $212,000 since 2015—when she also took home a $1,000 bonus. Like Collins, she can count herself among the nation’s top 10% of wage earners.

For more than 30 years, Murray has brain-damaged monkeys and subjected them to loneliness, depression, and anxiety in laboratory cages. PETA released video footage of her terrorizing these animals by exposing them to realistic-looking snakes and spiders. Her cruel and pointless experiments have yielded no treatments or cures for humans.

Under Gordon, NIMH throws money hand over fist at junk science. In addition to the $36 million it has used to fund Murray’s grotesque experiments over the past 13 years, funding for a battery of useless tests on other animals continues to be supplied by the agency. These tests include the widely discredited forced swim test, in which mice and other small animals are placed in inescapable beakers filled with water and made to swim to keep from drowning. NIMH also uses the tail suspension test—in which mice are hung upside down by the tail—and the foot shock test, in which mice or rats are shocked inside a locked chamber with an electrified floor.

The agency uses these experiments to test new medications for human depression, even though the results are highly unreliable—they’re no more predictive of human responses to drugs than a coin toss.

In fact, 95% of new pharmaceutical drugs that test safe and effective in animals fail in human clinical trials.

Collins, Gordon, and Murray are allowed to continue cashing in on the needless pain and suffering of animals, despite the failure of these methods to produce real-world solutions to human problems.

It’s time to hold these people accountable for their actions. Please add your voice to ours:

Tell NIH That You Won’t Tolerate the Torment of Monkeys