When Thoroughbred Bear Witness was born in 2000, it was hoped that he would be a champion racer. His grandfather, after all, was Triple Crown winner Secretariat; his mother was the Eclipse Awards’ 1986 Horse of the Year, Lady’s Secret; and his father was Skip Away, who won nearly $10 million in prize money. But the offspring of famous horses don’t always win. After failing to win 16 races, Bear Witness was deemed a “loser” and was “retired” from racing—even though he was only 5 years old. His owners, John and Kim Glenney, thought they were doing the right thing by giving Bear to a woman who trains show jumpers.

What happened after this is fuzzy, but his story has been pieced together, so we know that over the next decade, he was sold or given away to one owner after another. As with so many horses—especially those who start out their lives on the track—no one person was committed to caring for Bear. In 2015, he wound up, starving and sick, at a Tennessee auction. These auctions are usually the last stop before a horrendous journey to a slaughterhouse in Canada or Mexico. 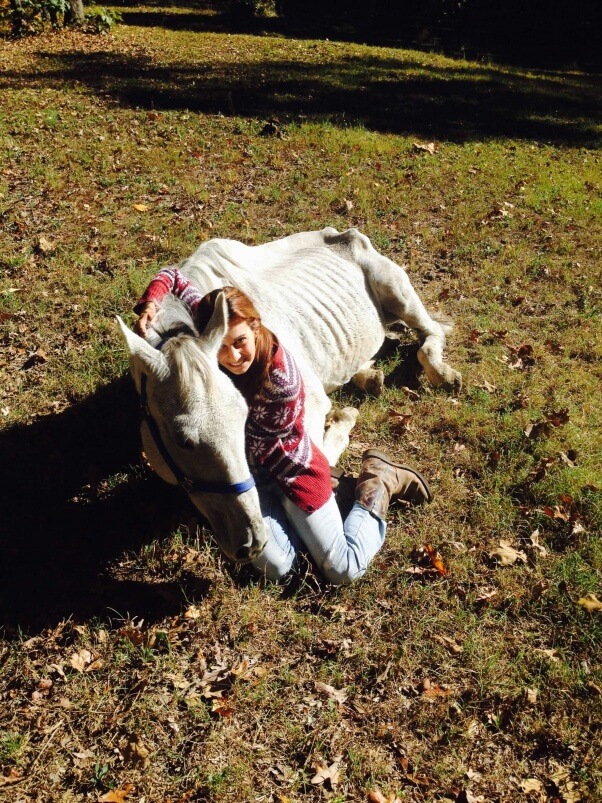 Bear Witness with Jessie Kunz, soon after he was rescued from a Tennessee auction.

That’s where a caring couple, Jessie and John Kunz, found him. They were horrified to see the skeletal horse, who was more dead than alive. His ribs and backbone jutted out, and his coat was scarred. He obviously hadn’t had a decent meal in a long time. He was suffering from a bacterial infection of the skin that caused scabbing and hair loss as well as an injured hoof and a deep wound on his leg.

Jessie and John never meant to buy a sick horse, but they couldn’t turn their backs on him, and Bear went home with them that day. They nursed him, fed him, and gave him the care and attention that he needed. When they saw a tattoo on his lip, they knew he had once been a horse used for racing, so they did some sleuthing. That’s when they found out who Bear was when he started out in life. They called PETA when they realized Bear was the half-brother of another very sick horse, Royale With Speed, whom PETA had rescued several years earlier during our horse slaughter transport investigation. We were happy to help Jessie and John obtain the results of the DNA test that they paid The Jockey Club to do. The test showed beyond a doubt that this ailing horse, now 15 years old, was Bear Witness.

At first, Bear Witness made tremendous progress—he gained 200 pounds in three months under Jessie and John’s care. He was gentle and affectionate and so grateful for the food and love that he was given. He bobbed his head excitedly when he saw them bringing his food out. He had another new friend, Jessie and John’s other horse. But the neglect Bear had endured had taken a heavy toll. One morning, this once lovely Thoroughbred was found on the ground, and he was simply too sick to rise. Despite the desperate efforts of two veterinarians, Bear was dying, so the compassionate decision was made to euthanize him.

He was passed around like an object in life, but in his last months and his final moments, he was loved and cared for. Jessie and John were—and still are—heartbroken, but they want Bear’s story told so that everyone will understand what happens to horses who are discarded by the racing and show-horse industries.

At Jessie and John’s request, local authorities are investigating Bear Witness’ starvation. We have spoken to authorities and urged them to prosecute the people who neglected Bear. We will update this story when officials have acted.

Bear’s first owners told PETA that after a few years in racing, they became so upset with what happens to horses that they got out of the business. Jessie and John went back to the auction and rescued another starving, neglected horse, who is now happy and doing well. You can help by urging your congressional representatives to support legislation to prohibit the slaughter of horses as well as the transport of horses out of the U.S. for slaughter. Take action here.