In a callous move, the American Association for Laboratory Animal Science (AALAS), a group that represents animal experimenters, posted a disturbing photo of a rat skeleton posed with a laboratory manual as part of an auction on the organization’s Facebook page. The item was made by a Washington State University experimenter, apparently from a rat who was killed in a laboratory, dissected, and then likely boiled to remove the flesh before being positioned as a twisted prop. The AALAS pulled the macabre auction item and photo after receiving a letter from PETA. 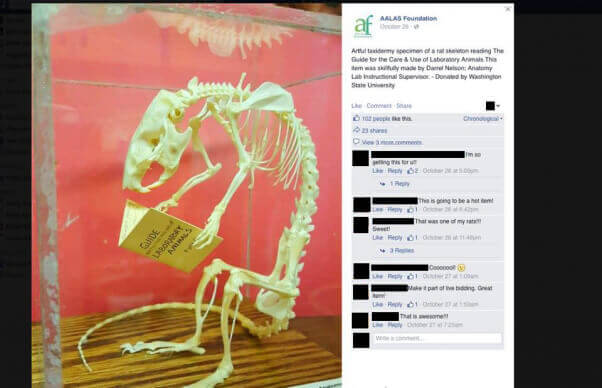 Rats are intelligent, social, and caring beings who are poisoned, mutilated, crippled, and killed by the millions in laboratories. This crude auction item that AALAS promoted, which makes it seem as though a skeletal rat were reading a copy of a laboratory manual on animal-welfare regulations, pokes fun at their suffering and at the rules designed to provide them with some semblance of relief. While AALAS insists that experimenters “care” about the animals they use, abuse, and kill, this proves otherwise.

Want to help rats hurt in cruel experiments? Click below!