With spin that would make even P.T. Barnum blush, the keepers at the National Zoo are claiming that taking newborn cubs away from panda mother Mei Xiang is for her own benefit. She has strenuously resisted losing her babies to rubber-gloved humans who want to use artificial nipples to force-feed her little ones but to no avail. She stands little chance of holding off the hordes of humans eager to pounce on what they can see only as brand-new cash cows. 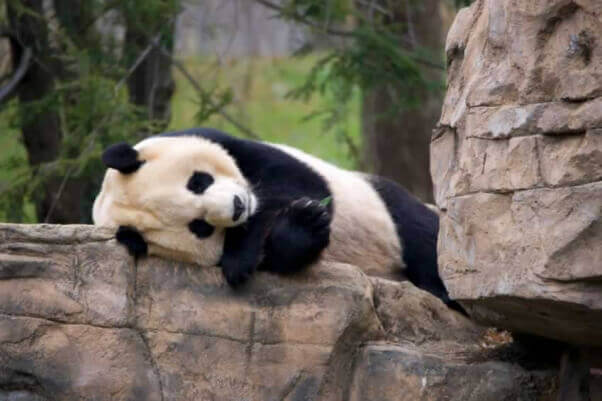 If left alone, panda mothers usually nurture and protect their young. They nurse and cuddle them. Look at the photos on the Internet of just such expressions of love, and your heart will melt. Mei Xiang knows what to do. The cubs squeal loudly when taken from their mom. The zoo team actually had the audacity to lament that it had a “challenging night” because Mei Xiang refused to hand over the cub she was holding and then gleefully claimed victory after “successfully” stealing the cubs. One cub never even got the chance to nurse but was instead bottle-fed serum derived from blood that had been drawn from Mei Xiang while she was being artificially inseminated (i.e., raped). That’s how the zoo treats a baby panda–making machine.

Zoos routinely perform this invasive procedure on pandas. Female pandas are fertile for only a brief window of time. As soon as one shows signs of going into heat, her vagina is swabbed and she’s poked and prodded to determine whether she’s ovulating. Males are anesthetized and electro-ejaculated (a probe is inserted into their rectum to produce electrical stimulations that cause ejaculation), and the semen, often from more than one male, is then inserted into the female with a laparoscope.

Often, the artificial insemination doesn’t “take.” When Mei Xiang last gave birth at the National Zoo, in 2013, one of her cubs was missing part of the upper skull, brain, eyes and jaw. A year earlier, she gave birth to a cub who only lived for six days.

More panda cubs have died in the National Zoo’s breeding programs than have survived. The zoo’s panda expert has admitted that removing cubs from their mothers can hinder the development of normal adult behavior, including mating. “We suspect that many of the behavioral problems we see in captivity stem from how we’ve been rearing the animals,” said one assistant curator.

If animal welfare, not public relations, is genuinely the priority, why does the National Zoo continue to put pandas through this physically and emotionally painful process? It’s not about helping imperiled wild populations. The first captive-bred panda released in China died shortly thereafter. There’s no pretending anymore that breeding pandas in captivity is anything more than a way to get customers through the gates. Plush pandas and panda posters and T-shirts bring in millions of additional dollars. In a 2006 article in National Geographic magazine, David Wildt, head of the National Zoo’s reproductive sciences program, said, “Nobody would ever commit this kind of money to any other species.”

Playing with pandas’ lives and disregarding a mother’s love for her newborns, all for profit, must stop.