Update: Today, PETA filed a complaint with the Texas attorney general urging his office to investigate possible questionable fundraising tactics on the part of the Texas A&M Foundation, which provides Texas A&M University with significant financial support. (See more below.) PETA uncovered the apparent irregularities in October when it contacted companies posted on the foundation’s website to share information about the university’s cruel and ineffective muscular dystrophy experiments on dogs.

“Initially, we wanted Texas A&M to come clean about the futility and cruelty of muscular dystrophy experiments on golden retrievers, but now, we suspect that misleading the public may be its SOP,” says PETA’s Dr. Alka Chandna. “While the attorney general sorts it out, real donors may want to take a critical look at what they’re supporting.”

The following was originally published on November 1, 2017:

While golden retrievers are lying on bare metal floors and dying inside the school’s muscular dystrophy laboratory, Texas A&M University (TAMU) President Michael K. Young is enjoying his $1 million annual salary, $200,000 housing allowance, and free membership in the local country club, courtesy of his university perks. You can see it all in his contract right here. This is on top of the $800,000 signing bonus that he pocketed when he took the job and other bonuses for successful “[f]undraising and development.” 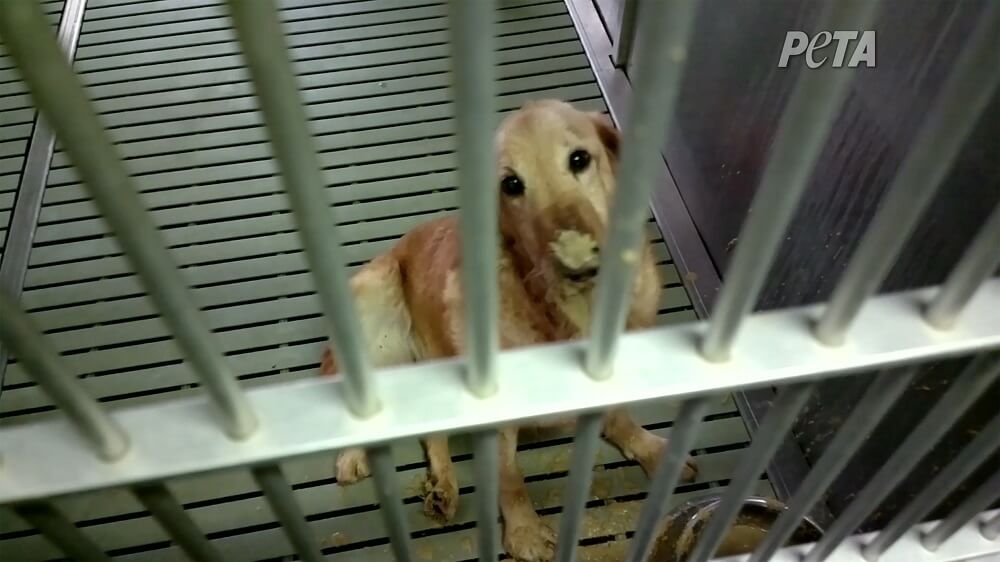 Oh, yes, the fundraising. PETA stumbled across some pretty strange things on that front.

We recently wrote to corporations that TAMU had listed on its Legacy Society website as some of its largest corporate donors in the $499,000 to $1 million category. We thought that these TAMU supporters might want to know about the dogs who are wasting away, out of the view of prying eyes, and used for experiments that just about everyone agrees don’t work.

It turns out that the dogs weren’t all that some of these companies didn’t know about. Several told us that they don’t have records of giving any donations that sizable to TAMU—or records of giving any donations at all to TAMU in recent years. One multibillion-dollar international corporation told us that it contacted the Texas A&M Foundation to request a copy of its giving records. It then determined that the gifts that the Legacy Society counted were from “a variety of sources” and from “a number of years ago,” and many “are not directly affiliated” with the company.

This company asked to be removed from the Legacy Society website. And now the entire list of supposed major donors has been deleted from that TAMU page. That’s probably in the best interests of any real donors, because who would want to be linked to a school that’s known for hurting sick dogs in laboratories?

It's time for @TAMU to stop making excuses. Urge them to STOP breeding and experimenting on dogs! https://t.co/juz03QxmJQ pic.twitter.com/ve9rUaFSkD

This is not the first time that something like this has happened. The university has repeatedly released misleading statements about its muscular dystrophy experiments on dogs and even lied outright about the deliberate breeding of these dogs to develop canine muscular dystrophy.

🔊 Listen to how this Texas A&M University spokesperson tries to justify cruel and pointless experiments on dogs.

Posted by PETA (People for the Ethical Treatment of Animals) on Friday, October 27, 2017

We’ll say it again: Thirty-five years of these cruel experiments on dogs have failed to lead to a cure or a treatment to reverse symptoms of the disease in humans.

Young’s contract includes yet another bonus, this one for “commercialization” of research. So it appears that he’s “throwing everything against the wall and seeing what sticks”—the more experiments that he’s got going on his campus, the greater the chances are that he’ll get that bonus.

We’re afraid that Young is going to have to earn that extra cash without the help of suffering dogs, because we are determined to stop these experiments and see that all the dogs in TAMU’s muscular dystrophy laboratory are freed. Please add your voice to ours.