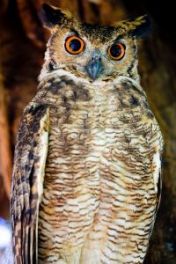 Hey, I didn’t write the title for this post, so don’t take it out on me. It’s actually a reference to a feature that appeared in everyone’s favorite quarterly publication, Animal Times, this fall. And I thought it was pretty damn cute.

For most of the regular commenters, this quiz isn’t mandatory—feel free to just skim through and look for the funny parts. But Halo Snipe, the bad Steve, Dr. C, and Mars: I’m expecting you all to post your scores. I’m guessing you four aren’t PETA members already, but if you’ve just been waiting for that extra incentive, Animal Times comes free when you donate $16 or more.

Anyway here it is. No cheating (answers after the jump).

Do you know everything there is to know about what’s happening in the finned, feathered, and furry world of animals? To find out, put on your thinking cap (synthetic, of course) and use your primate prowess to answer the following questions:

1. According to a 2006 Harvard study, people who frequently eat chicken have a 52 percent greater chance of developing what disease?
a. Bird flu
b. Impotence
c. Bladder cancer

3. In Anna Wintour’s closet, you might find the skins of:
a. Former assistants
b. Cats and dogs
c. Leopards
d. All of the above

4. Which of the following cosmetics companies still tests on animals?
a. Revlon
b. Estée Lauder
c. Clinique
d. CoverGirl

5. Which of the following animals have brains similar to humans’ and are able to remember 50 faces from photographs for up to two years?
a. Sheep
b. Dolphins
c. Ted Nugent

6. Former US Vice President Al Gore could save more water by not eating a pound of beef than by:
a. Disabling the irrigation system at his Tennessee mansion
b. Not showering for a year
c. Cutting back to six lattes a day

7. Which country has a political party dedicated to animal protection?
a. The Netherlands
b. Tonga
c. India

8. Which celebrity had a change of heart about wearing fur after being named on PETA’s 2006 Worst-Dressed list?
a. Lindsay Lohan
b. Christina Ricci
c. The GEICO cave man

9. Animals at The National Zoo in Washington, D.C., have died after:
a. Eating poison put in their enclosure to kill rats
b. Their infections went untreated for weeks or months
c. Being crushed by a hydraulic door
d. All of the above

10. The president of which country is a vegan whose Easter message encouraged people to spare animals from “our lust for meat”?
a. Serbia
b. Slovenia
c. Sweden