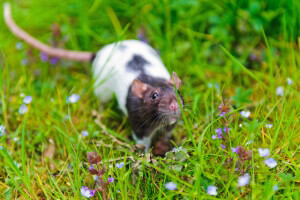 It’s impressive what scientists discover when they move beyond archaic experiments on animals. Researchers recently tested the effectiveness of a tuberculosis vaccine with a novel in vitro method that uses human cells collected from donors—and they discovered that this humane method for predicting how the vaccine will behave in humans can replace the typical use of mice in cruel vaccine tests. Mice used in such tests often have their throats cut open, are infected by being injected with bacteria, and are later killed and dissected.

The researchers who conducted this experiment are hopeful that by using this human-relevant and humane new testing method, vaccines can be tested and produced without involving animals at all. Experts recently stated that wider adoption of such a human-based approach to vaccine development is sorely needed, because experiments on animals poorly reflect the behavior and effectiveness of vaccines in humans.

As PETA has been advocating for years, these humane methods of developing and testing vaccines can save countless lives—both animal and human. Thankfully, more researchers are embracing in vitro vaccine testing as well as other modern and effective ways to advance human health without harming animals.