Student researchers at Iowa State University are developing a state-of-the-art method to save countless animals from cruel, expensive, and unreliable experiments—and PETA has awarded them a grant to further their efforts.

We donated $1,000 to undergraduates Marta Sucur and Catie Meis and graduate students Jeremy Caplin and Rajeendra Pemathilaka, who are working in the laboratory of Dr. Nastaran Hashemi, to help them build one of the first-ever “placentas-on-a-chip.” The product will be a miniature, functioning human placenta built from human cells. It will be able to be used to model diseases that might affect the organ during pregnancy as well as to test potential treatments. Thanks to PETA’s donation, the students were able to beat their online fundraising goal and set a new one to purchase equipment in order to finish and test their prototype. 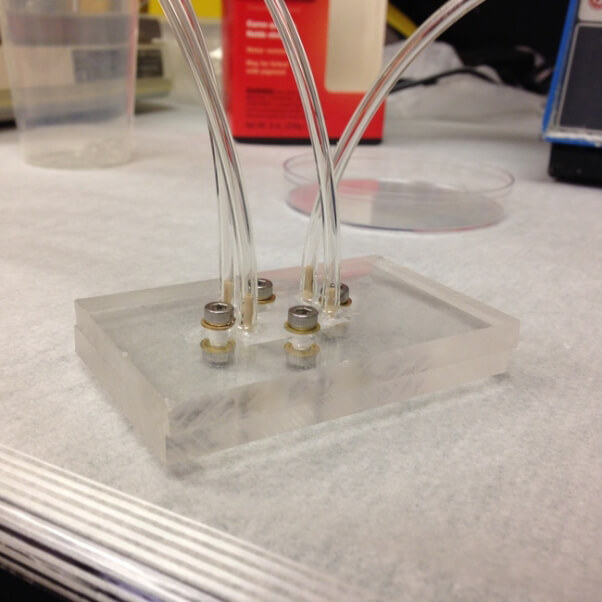 As Sucur, a senior at Iowa State, explains, “Animal testing is something our society has been making attempts to avoid, and I believe these chips are a huge step in the right direction. The availability of a chip such as ours may save many animals’ lives and move toward a more ethical and effective method of testing.”

In typical experiments on the placenta and exposure to toxins during pregnancy, mice, rats, guinea pigs, rabbits, monkeys, and other animals are impregnated, injected with chemicals, subjected to invasive experiments, and killed so that their developing fetuses and placentas can be removed.

Not only are these experiments on animals extremely cruel, there is also widespread acknowledgement in the scientific community that they are slow, expensive, and inapplicable to humans—particularly when it comes to experiments related to the placenta.

It’s no wonder that organs-on-chips and other human-based research methods are growing in popularity. PETA named biotech startup Emulate, Inc.—which was started by the Harvard team that pioneered organs-on-chips—its 2014 Company of the Year for its work to commercialize this innovative and lifesaving technology.

These student researchers at Iowa State University represent the future of science—developing creative solutions for pressing medical problems without caging, poisoning, or killing animals. We’re looking forward to the day when these young scientists’ innovative research method is used in laboratories around the world.