Her story is a haunting reminder of why it should be illegal to chain dogs. Storm was just 2 years old when she strangled to death at the end of her chain after being chained up outdoors like a rusty old bicycle and left unsupervised. After calls about Storm’s horrific death flooded our office, PETA wrote to the mayor of the town in which she died, Portsmouth, Virginia, asking him to introduce “Storm’s Law,” an ordinance that would ban or seriously restrict chaining.

Storm’s owners claim to suspect foul play, but cruel people—who often poison or shoot dogs because they are annoyed by their barking or steal them for use as “bait dogs” in dogfights or to sell to laboratories for experimentation—are only one of the many dangers that chained dogs face. Obviously, Storm should have never been chained in her sad little mud patch to begin with. 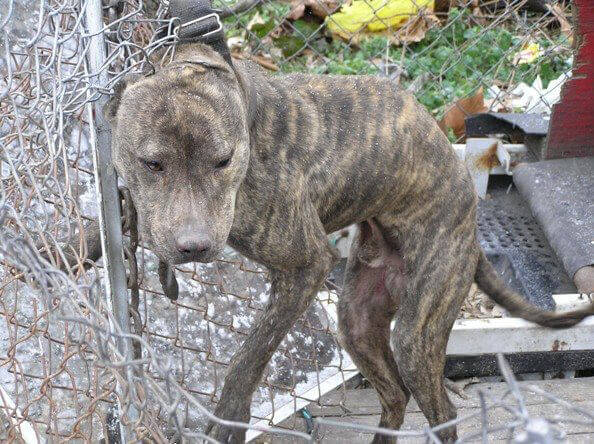 PETA receives hundreds of reports of chained dogs, like the one pictured here, every year.

Dogs can strangle or injure themselves when their chains become tangled, or they can be attacked by other animals. Often deprived of food, water, veterinary care, and shelter, chained dogs routinely suffer from a range of maladies, including malnutrition, dehydration, flea infestations, mange, and untreated injuries, and can freeze to death or die of heatstroke.

And dogs aren’t the only ones who suffer the ill effects of chaining. Subjecting a social pack animal to a life of isolation contributes to aggressive behavior, making chained dogs three times as likely to bite.

More than 120 jurisdictions have passed laws banning or restricting chaining. If, like Portsmouth, your area still allows dogs to be chained, please use PETA’s tips to get a chaining ordinance passed.