As viewers of the popular reality shows about hoarders can likely confirm, peering inside the homes of people who suffer from the psychological compulsion to collect things has a certain morbid attraction, until you realize the toll it takes on the families of the afflicted—and it’s far worse when the “things” they’re collecting are living, feeling beings.

Animal hoarding is a serious and growing problem, with hoarders taking on far more animals than they can properly care for. The number of reported cases is on the rise, leading the Animal Legal Defense Fund to call hoarding “the number one animal cruelty crisis facing companion animals in communities throughout the country.”

Chillingly, the so-called “no kill” movement propagated by the likes of Nathan Winograd offers cover for these disturbed individuals, many of whom claim to be “rescuing” the animals and attempt to justify the suffering that they cause as a matter of principle. A Los Angeles Times blog post reported that a quarter of the roughly 6,000 new hoarding cases reported each year in the U.S. consist of supposed “shelters” and “rescues.” 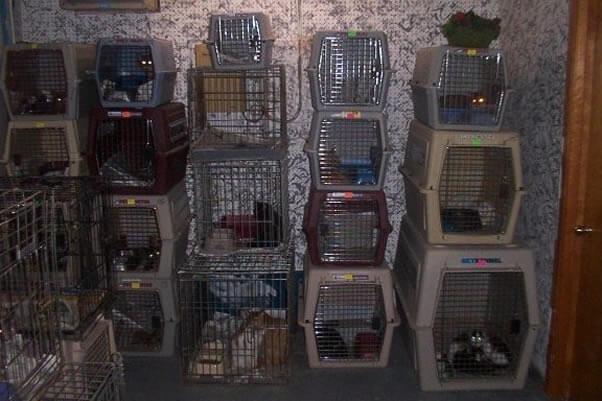 Animals kept in crates at a “no kill” shelter.

Even when rescues and animal shelters aren’t hoarding animals themselves—like the self-proclaimed animal “hospice and rehabilitation center” called “Angel’s Gate” and the now-defunct “Sacred Vision Animal Sanctuary”—they all too often give away animals to anyone who will take them, including hoarders, to manipulate their euthanasia statistics, regardless of what tragedy that translates into for the animals.

The failure of “no kill” animal shelters and rescues to address the problems facing homeless animals—and often making matters worse—is why PETA remains focused on the solution to the animal overpopulation crisis: creating a no-birth nation. PETA’s fleet of mobile low-cost veterinary clinics (responsible for sterilizing 10,564 animals in 2011 and almost 80,000 so far since 2001!) and our advocacy of strong spay-and-neuter legislation are key to keeping animals out of the hands of hoarders and other people who don’t have their best interests at heart and guaranteeing that every animal born has a loving, permanent home awaiting him or her.

How You Can Help Animals in Shelters

Volunteer to help your local animal shelter screen potential adopters and placement partners. Animal shelters can contact PETA for placement-partner applications and agreements. Please also be sure to spay or neuter your animal companions and encourage others to do the same—it’s the best way to end the need for animal rescues altogether!