When you work for PETA, it’s hard to ever really go on vacation. That’s because everywhere you go, you are bound to encounter people doing not-so-nice things to animals. Take my recent trip to Egypt. Skinny stray cats and dogs were hanging around outside all the hotels and restaurants, camels were living in squalor outside the pyramids for the sake of a photo opportunity, and the streets at all the big tourist spots were thick with horse-drawn carriages. I took these photos in Luxor, home to the famous Karnak temple and the Valley of the Kings and therefore overrun with sightseers. The carriages were lined up for a whole city block, waiting to draw in gullible tourists: 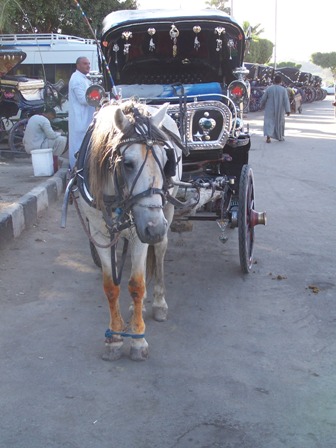 Many of the horses are hobbled when they aren’t working. This one was hobbled so tightly that he couldn’t move even an inch in any direction: 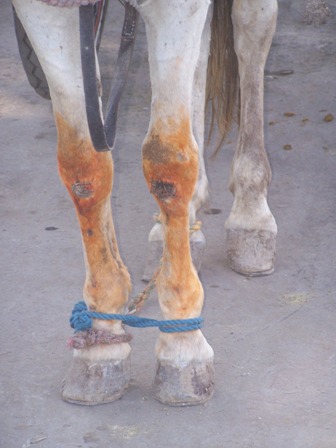 Notice the sores on the horse’s knees. I saw many horses with such sores. I saw no indication that working horses were ever provided water or shade. The cracks of the drivers’ whips could be heard blocks away.

These people are in business strictly to cater to tourists, who ignorantly think horse-drawn carriage rides are “romantic.” Somehow, I miss the “romance” in staring at the rump of a tired and dejected horse.

Fortunately, the good folks of Rome (the birthplace of romance) agree. Rome’s city council recently restricted the use of horse-drawn carriages to city parks, allowing them on city streets only on weekends. During the week, carriage operators will instead ferry tourists around in vintage-looking electric cars, (similar to the cars that New York City is currently thinking of employing). The move came in response to the death of Birillo, a horse who broke his leg after being hit by a truck and who lay on the street in agony for four hours before being euthanized.

In honor of Birillo and all his toiling brethren, give a carriage driver a piece of your mind and give the horse an apple (carry some with you for the purpose) instead of spending your hard-earned coin the next time you’re on vacation.