He’s right. And the same psychological effects apply to more than human kids. They also apply to the millions of dogs penned and chained alone backyards—in solitary confinement—across the country. These animals are not criminals. They are supposedly our “best friends.” And that’s no way to treat a friend. 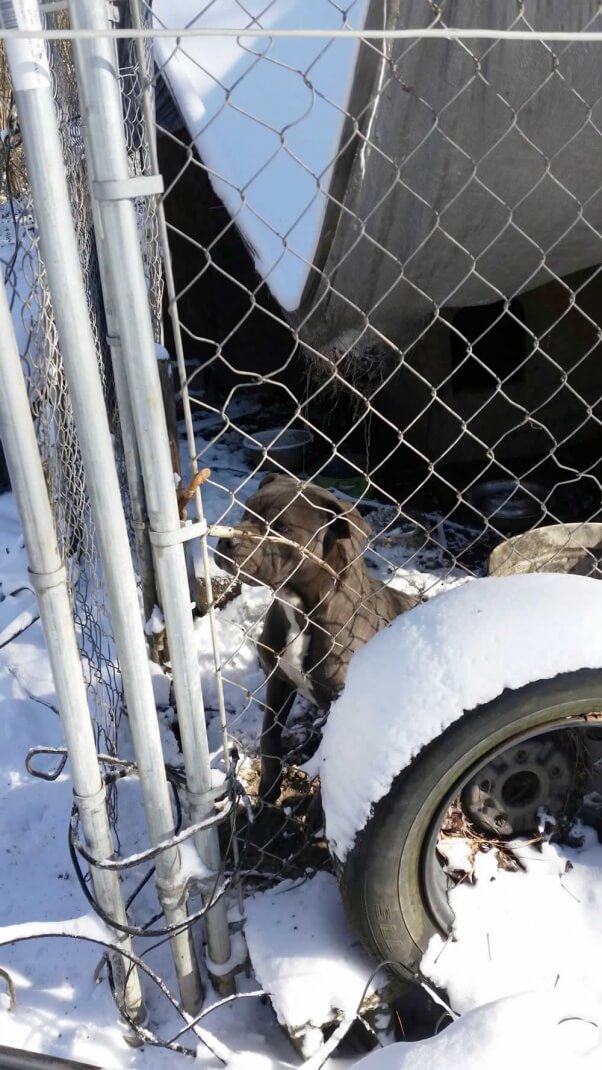 This is Polo, and this is how PETA’s straw-delivery volunteers found him last weekend in Suffolk, Virginia, after record-breaking winter storm Jonas barreled up the East Coast. 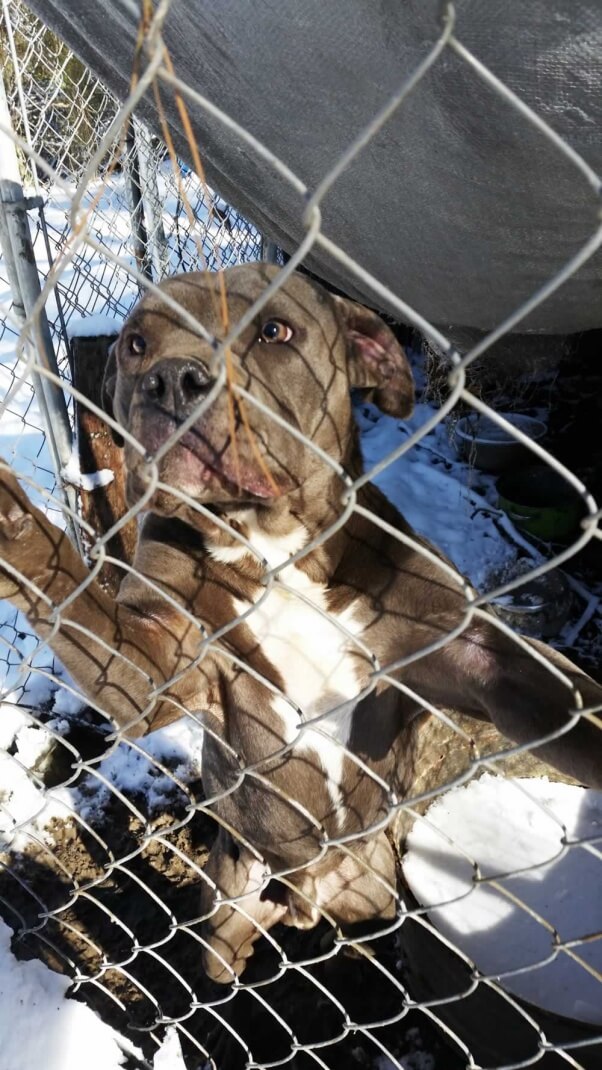 Polo has been permanently sentenced to solitary confinement in this squalid, junk-strewn pen. He never gets to come out—ever. In fact, the gate to the pen was sealed shut when our volunteers arrived—they had to cut it open to get inside and clean up his feces (three large leaf bags full) that covered virtually every square inch of the ground.

Most of Polo’s pen was covered with a tarp, which may have afforded him some shade in the summer, but now, during the winter, it prevented Polo from being able to seek even the minimal comfort of the sun’s warming rays. The tarp was so weighed down with snow that it was near collapse, further shrinking Polo’s already minuscule living space. 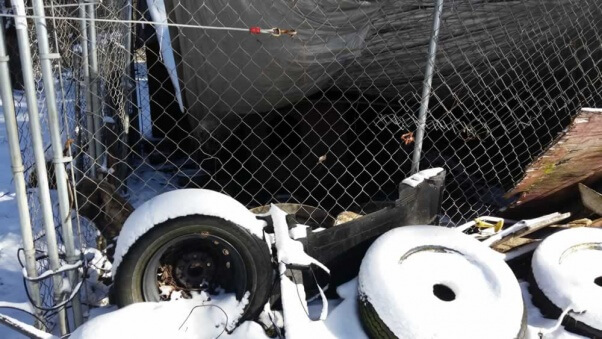 In addition to cleaning the pen, PETA’s volunteers pulled back the tarp, spread straw over the mud, and stuffed straw inside his doghouse (which PETA had given him on a previous visit). They also gave Polo food, treats, chew toys, fresh water, and a few minutes to run and play, which he did, grabbing an old plastic bottle, chewing it, and throwing it into the air. It was the first time in many months, perhaps in a year, that he had been allowed any freedom. 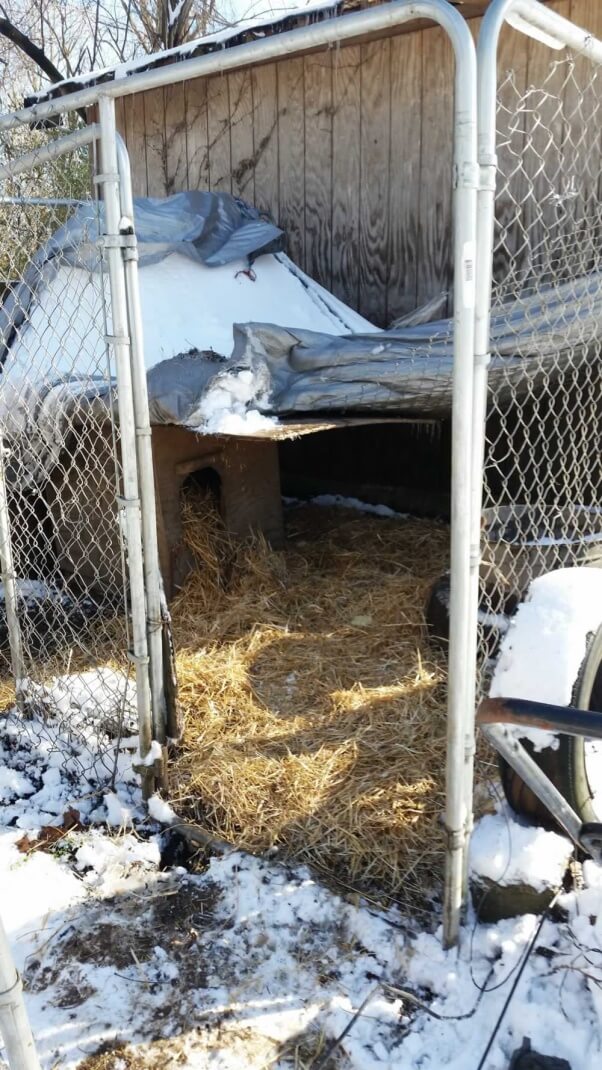 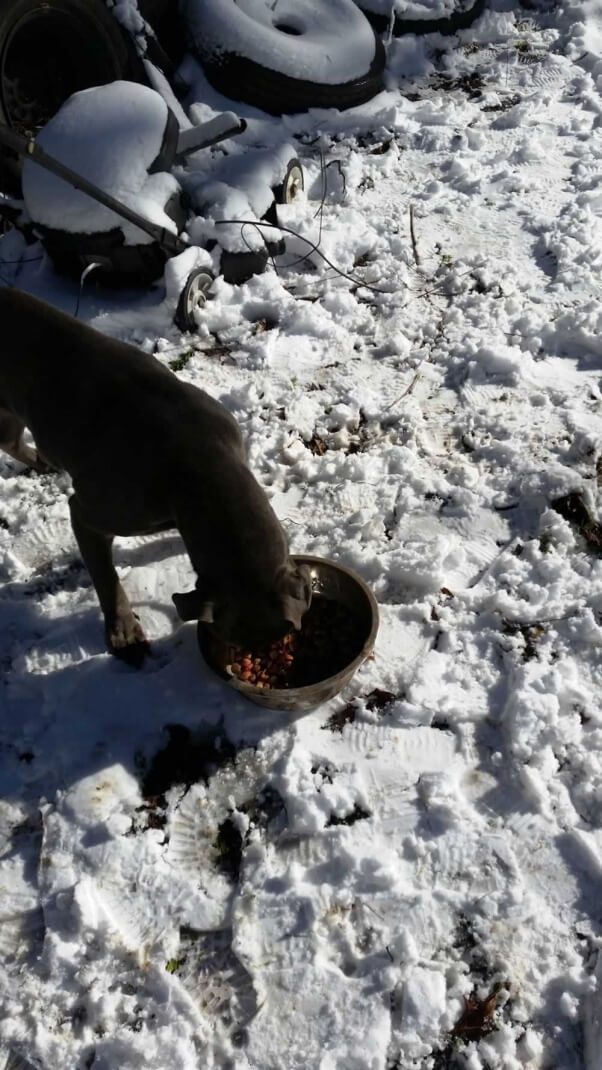 Like humans, dogs subjected to long periods of solitary confinement also suffer psychological damage. They can go mad from confinement, constantly pacing and circling, becoming fearful and aggressive, and ultimately giving up hope and showing little or no interest in the world outside their chain or pen.

Polo hasn’t given up hope yet, and neither have we. We keep going out, every single day, to visit “backyard dogs” and offer them desperately needed food, water, flea treatment, toys, straw bedding, doghouses, and love. We keep working to pass bans on permanently chaining and penning dogs outdoors. And we keep spaying and neutering hundreds of dogs and cats every month to prevent more of them from ending up neglected and forgotten like poor Polo at the back of someone’s yard. 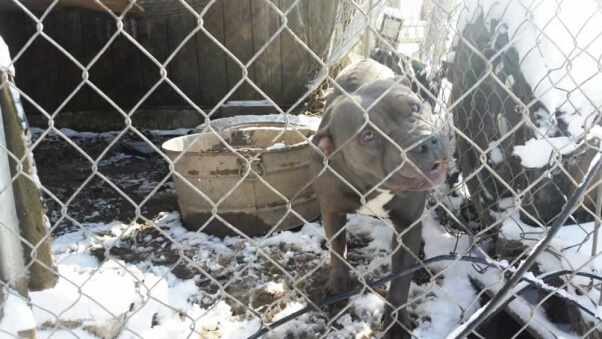 It’s time to end the solitary confinement of all living beings. You can support our work to improve the lives of chained and penned dogs by clicking here.