The Smashing Pumpkins are currently hitting Pacific hotspots on their global tour in support of their new album, Oceania. And during their concert in the Philippines, they also supported PETA Asia’s efforts to free Mali—an elephant who has been suffering for decades without companionship or sufficient care at the Manila Zoo—by offering PETA Asia space for an information table at the Smart Araneta Coliseum. 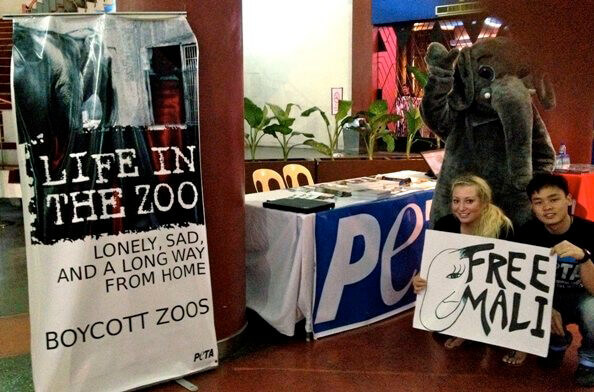 Mali and the Infinite Sadness

Thanks to the Smashing Pumpkins’ kindness, concertgoers learned how Mali was taken as a nursing baby from Sri Lanka in 1977 and has spent about 35 years in a small concrete pen—33 of them completely alone. Following a sustained campaign in her behalf by PETA Asia, Philippine President Benigno Aquino issued a directive stating that Mali should be considered for transfer to a sanctuary after an evaluation of her health, but Manila city officials are stalling.

PETA Asia has secured a place for Mali at a sanctuary in Thailand, where she could have acres to roam, rivers to bathe in, fresh vegetation to eat, foraging opportunities, the company of many other elephants, and, of course, the care of elephant experts 24 hours a day. People attending the concert were able to sign PETA Asia’s online petition right at the information table, as well as picking up leaflets and stickers to spread the word about Mali’s plight.

Even if you couldn’t make the show, you can still help PETA Asia and the Pumpkins give Mali a smashing new life—just sign the online petition.