A recent report by Oxfam is shining a light on the abhorrent conditions inside the slaughterhouses of some of the nation’s largest chicken producers. And this time, we’re not just talking about what happens to the animals.

Research and interviews conducted with factory workers at chicken giants Tyson, Perdue, and Pilgrim’s Pride revealed a workplace culture in which bathroom breaks were reportedly so fervently discouraged that workers began to wear diapers so that they could keep working as they soiled themselves, afraid of losing their jobs if they asked to use the bathroom too many times. 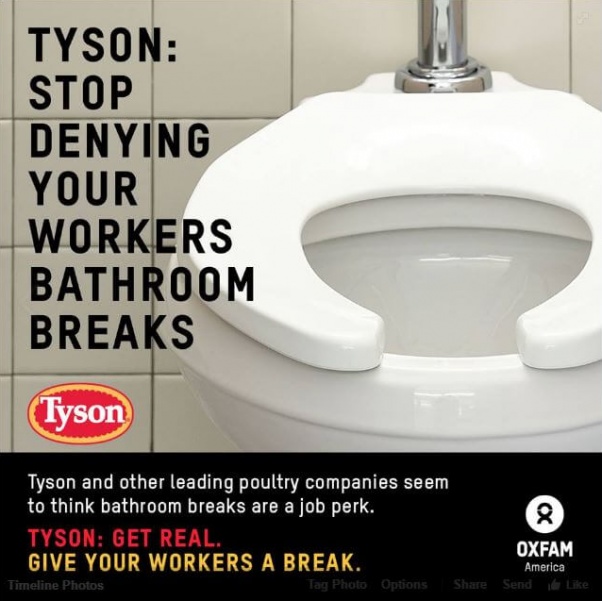 Sadly, this report confirms that the sickening denial of even the most basic needs of individuals (regardless of their species) is business as usual in the poultry industry. Little has changed since 2005, when Human Rights Watch described slaughterhouse line work in the United States as a human rights crime.

In addition to having to urinate and defecate on themselves sometimes, workers in chicken slaughterhouses are scratched and pecked by kicking, clawing animals and forced to breathe air filled with dust, debris, and feathers from terrified birds’ flapping wings. The chickens themselves spend their lives in windowless sheds that reek of ammonia before they’re hung upside down to have their throats slit.

Animal rights are human rights, too.

Routine abuse runs rampant in the meat industry. The Oxfam report only highlights what we’ve known for years: Like the slaughterhouse workers denied even the opportunity to use the bathroom, chickens and turkeys are stripped of their dignity and their inherent worth as living beings, all so that others can have a fleeting, low-cost meal.

Whether out of concern for the animals or the workers, the conscionable choice that anyone shocked by this report can make is to go vegan.

Share this eye-opening video with your friends, family, and social media followers. Let them know that every piece of chicken flesh on their plate is the end result of a long process filled with cruelty—to both humans and animals.