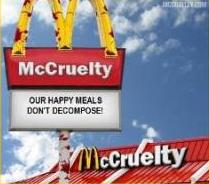 Apparently—unlike the cows who are killed to make them—McDonald’s burgers can live to a ripe old age. In April, New York City–based artist and photographer Sally Davies bought a Happy Meal and left the contents sitting out in her kitchen as an experiment. Six months later, the burger looks much the same as it did on the day it was slapped together. Says Davies, “The only change that I can see is that it has become hard as a rock” and “the food is plastic to the touch and has an acrylic sheen to it.”

Hmm … if even mold won’t eat McDonald’s food, no one else should, either. Oodles of 100 percent natural, biodegradable, and cruelty-free veggie burgers are available to make our taste buds and animals happy.