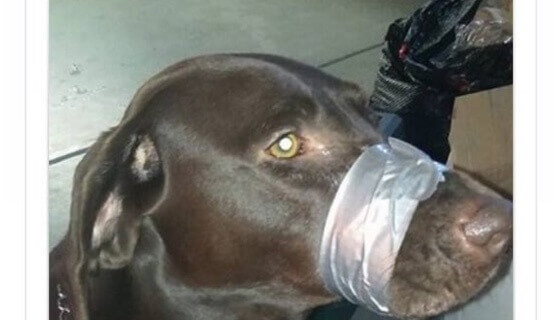 In the letter, PETA notes that Brown and another dog may remain in Lemansky’s custody and asks that both dogs be confiscated for their own safety and, if she’s is convicted, that she be prohibited from owning animals for as long as possible.

She had posted a photo on Facebook of her Labrador, Brown, with a duct-taped muzzle.The caption: “This is what happens when you dont shut up!!!”

Posted by The New York Times on Tuesday, December 1, 2015

“It would demonstrate a shocking lack of empathy for others’ suffering to tape a dog’s mouth shut and then brag about this cruelty on social media,” says PETA Senior Director Colleen O’Brien. “Any dogs in this woman’s custody may be in danger, which is why PETA is calling for the immediate confiscation of any animals in her home.”

Greetings from PETA. This letter concerns a case that your office is handling involving Cary resident Katharine Lemansky, who faces cruelty-to-animals charges for allegedly binding the muzzle of her dog, Brown, with duct tape in an apparent attempt to prevent her from barking. Reportedly, a photo of Brown with her muzzle wrapped in duct tape was posted to Lemansky’s Facebook page, accompanied by the caption “This is what happens when you dont [sic] shut up!!!” Alarmingly, Brown and her littermate apparently remain in Lemansky’s custody.

Since repeat offenses are common among animal abusers, we ask that if Lemansky is convicted of these charges, she be required to attend anger-management classes at her own expense and be prohibited from owning or harboring animals for as long as possible. In the meantime, we ask that officials confiscate both dogs as a protective measure provided for by N.C.G.S.A § 19A-3.

Thank you for your time and consideration.