A truck bound for a Shenandoah Valley Organic slaughterhouse in Harrisonburg, Virginia overturned, killing many chickens and maiming others. Birds were left to suffer on the roadside for several hours after the accident. 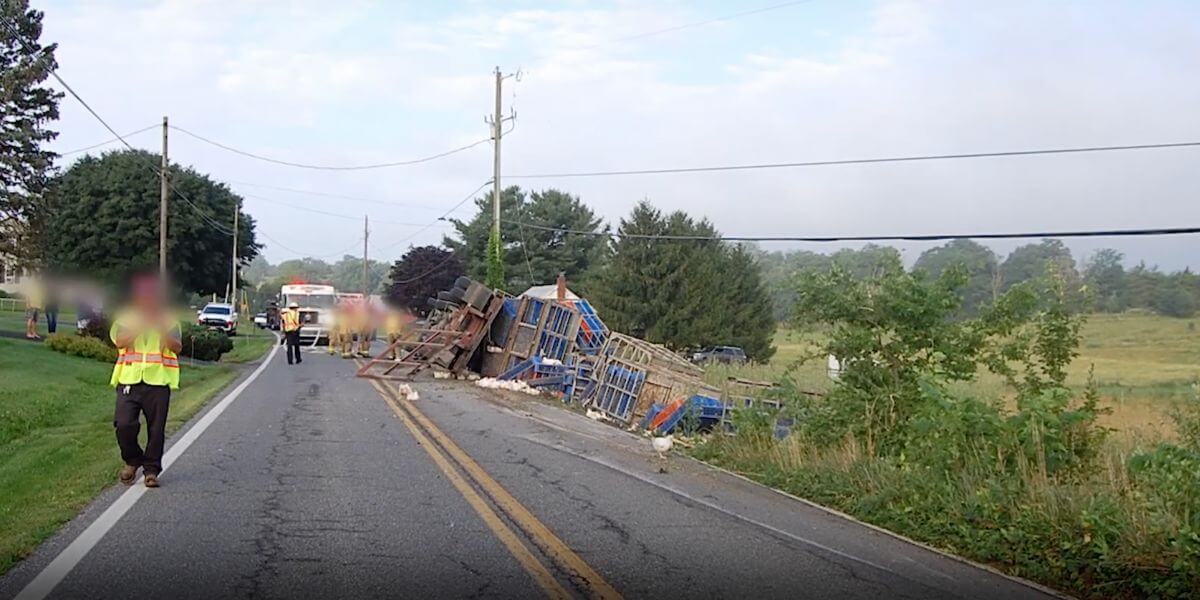 The vehicle ran off one side of the road and slammed into utility poles before overturning—an ordeal that endangered other motorists and caused chickens to be crushed or ejected from crates.

PETA obtained Virginia State Police dashcam footage from the aftermath of the crash, in which chickens can be heard crying out repeatedly. In the footage, the truck driver admits that he “might have closed or blinked [his] eyes”—but a responding officer suspected that he was likely looking at his phone.

We also found that this same driver had been found guilty of several previous traffic violations, including three speeding tickets, improper driving, and driving without a license. The fact that he was transporting chickens for Shenandoah Valley Organic—which that claims to sell flesh from “humanely raised” chickens—shows a glaring gap in the company’s standards. It doesn’t matter what the standards are for disingenuously named “humane certified” companies, though, because there’s no humane way to exploit and kill animals for food.

The trucker involved in the crash was found guilty of improper driving, but PETA’s asking Shenandoah Valley Organic to take action to prevent these incidents from occurring in the first place. We wrote a letter to its CEO urging him to immediately review all company and contract drivers’ records and their fitness to haul live animals and to prohibit any individuals with driving-related offenses from getting behind the wheel. In addition, we’re asking the company to develop a contingency plan in the event of another wreck, including protocols for prompt retrieval, humane handling, and painless, on-site relief from suffering.

What Happens to the Animals Who Survive Truck Crashes ?

Crashes involving trucks hauling live animals to farms or slaughterhouses aren’t uncommon. In December 2022, cows were injured and killed when a truck overturned on the highway.

The victims who are killed in these incidents endure terrifying, painful deaths—but the animals who do survive the hellish journey to the slaughterhouse don’t fare any better. Workers round them up and haul them on another truck to the slaughterhouse, where workers slit their throats, often while they’re still conscious.

Here’s What YOU Can Do

No animal deserves to be exploited and killed for their flesh, eggs, or secretions—period. The best thing that you can do to help animals suffering in the meat, egg, and dairy industries is to go vegan.