There is a certain kind of person, it seems, who enjoys dressing up like a deranged escapee from some historical theme park and swilling mint juleps just to watch horses run around a dirt track for a couple of minutes. But as a new PETA mobile billboard will remind visitors arriving at Churchill Downs to attend the 2013 Kentucky Derby, for the thoroughbreds who will be running on Saturday, horse racing is a matter of life and death. 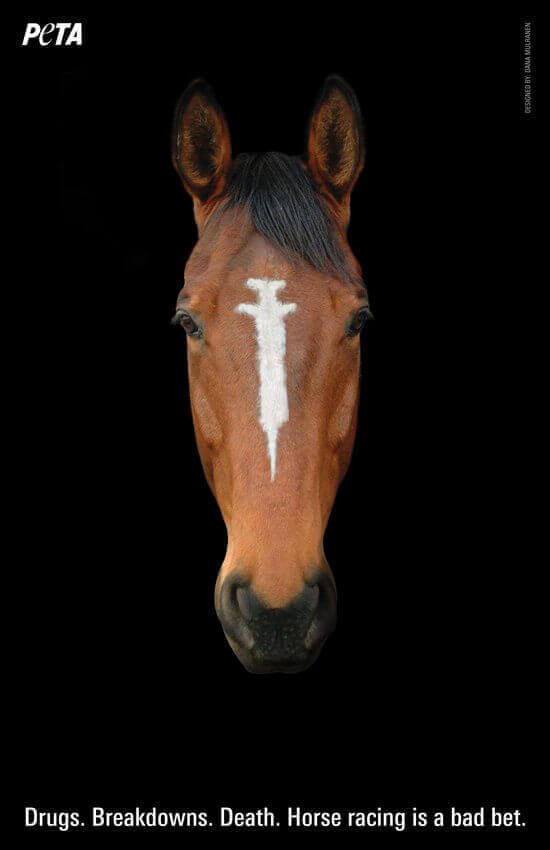 PETA’s ad will be driven up and down the streets outside the racetrack in the days leading up to and on the day of the derby. Designed by Dana Mulranen, a gifted graphic and interactive design major at Temple University’s Tyler School of Art, the billboard draws attention to the misuse of both “therapeutic” and illegal drugs that the racing industry uses to keep injured and tired horses running, leading to the deadly breakdown of more than three horses every day on U.S. racetracks.

Even if they survive being pumped full of drugs and forced to run at breakneck speed on hard tracks, thoroughbreds face another threat when they can no longer compete: They are often transported to slaughterhouses. There, they are shot in the head, are hoisted into the air by one leg, and have their throats slit so that their flesh can be sold for human consumption.

Please urge your U.S. legislators to support the SAFE Act—the bill that stops the export of American horses for their meat as well as bans their slaughter within our borders.

And when it comes to the derby and all other horse races, don’t attend ’em, don’t watch ’em, and don’t bet on ’em!