Do you know what you’re seeing when you look at seafood? It seems that most of us don’t. When Consumer Reports tested 190 different samples of fish from restaurants and stores, they found that more than 20 percent were being marketed as something other than what they actually were. A similar investigation by the Boston Globe found that as much as 48 percent of fish flesh is mislabeled.

The findings will no doubt dismay people who try to buy only species of fish that they think are sustainable. But “sustainable” is simply a marketing buzzword that the seafood industry likes to use. Eating any fish at all contributes to the decimation of the ocean’s ecosystem. 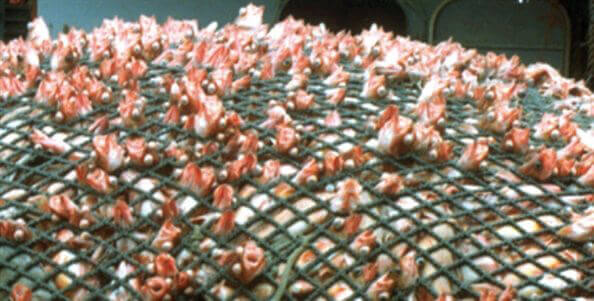 The massive nets and long-lines used by factory fishing trawlers are indiscriminate in what types of fish they catch, and fishers simply toss overboard the dead or dying dolphins, sea turtles, and other “bycatch” they don’t want. Farmed fish such as salmon and sea bass are often carnivorous, so many pounds of wild fish must be caught to feed those on farms.

Whether the label on the package matches the fish under the cellophane, one thing we can be sure of is that the flesh we are eating came from an intelligent animal with a unique personality who did not want to be gutted alive or suffocated. If we can eat faux fish, such as Vegieworld’s codfish, salmon, shrimp, and tuna, that tastes the same, is free of harmful toxins like mercury and PCBs, and doesn’t claim any animals’ lives, why not?