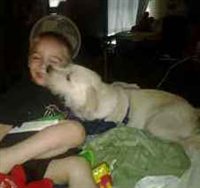 Last December, a little white dog got his Christmas wish when he was adopted from an animal shelter by a loving family that named him, appropriately, Santa Paws. But this year, Christmas nearly took a tragic turn for the plucky pup.

One day when Santa Paws was in his yard, he was attacked by another dog and suffered a deep puncture wound to his neck. The wound became infected and required surgery, but the distraught family knew there was no way that they could afford to pay the entire bill.

In desperation, they posted a plea on Craigslist begging for help with Santa Paws’ vet bills. A quick-thinking PETA member alerted our Community Animal Project (CAP), which helps animals in the area surrounding our Norfolk, Virginia, headquarters. CAP helped pay for Santa Paws’ surgery, and he got back home for the holidays.

The grateful family posted another Craigslist message—this one thanking PETA for a “holiday miracle.”

This holiday season, don’t forget the many ways in which you can be a miracle for an animal in need.