These pictures kind of tell their own story, which, as I interpret it, is that a lot of MPs are pretty hacked off with the MoD for being so bleeding stroppy about the Queen’s Guards’ kit, innit? Or, translated into American, dozens of British politicians gathered outside parliament yesterday to call on the Ministry of Defence to ban the use of bear fur in making the well-known caps worn by the palace guards. Either way you look at it, it’s pretty damn wonderful—and it’s a big coup for PETA Europe in its quest to save Canadian black bears from a horrible fate. Great to see so many politicians getting involved in an issue on behalf of the British public, which—like most reasonable publics—is overwhelmingly against turning bears into hats without a bloody good reason. 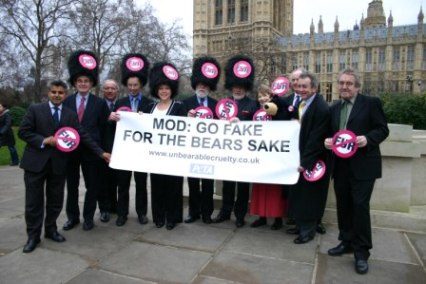 Glenda Jackson, Mike Hancock, George Galloway, and dozens of other cross-party MPs protest the use of bear fur in The Queen’s Guards’ caps outside the Houses of Parliament 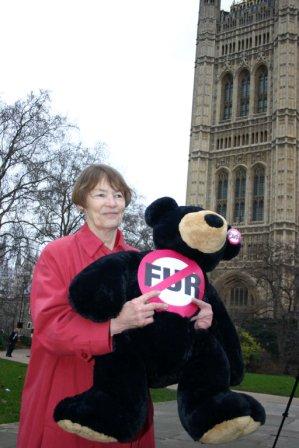