At the risk of stating the obvious, betta fish—those small, colorful fish with the flowing fins—are not toys. Beautiful, yes. Inanimate, no. So when PETA learned that Rite Aid was selling Teddy Tanks—stuffed animals with tiny tanks in their stomachs, meant to hold betta fish—we contacted the drugstore chain and urged it not to carry the product, as it encourages children to treat living beings like playthings. Rite Aid agreed, and it has informed us that it’ll no longer sell the abominable atrocities. 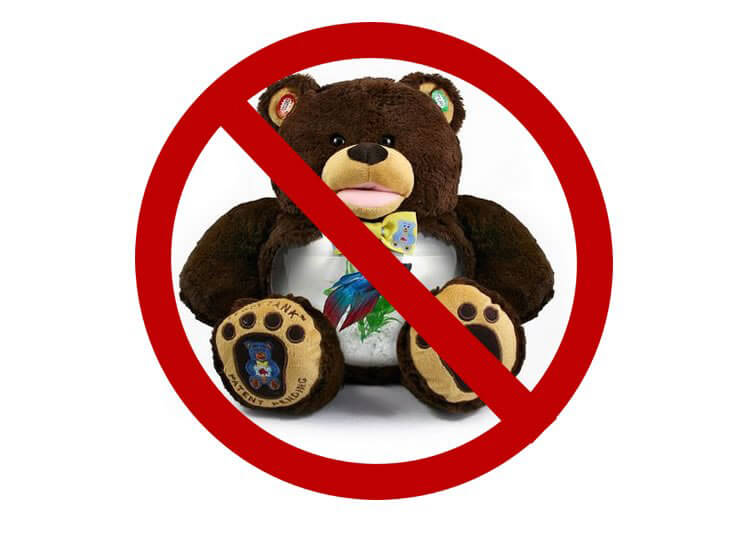 Myths abound about betta fish, often repeated by ill-informed pet-shop employees. Betta fish (like any other fish) require much, much more than a small bowl of water. Native to Asia, wild betta fish live in the shallow waters of rice paddies, ponds, or slow-moving streams. They do NOT live in mud puddles, as pet-shop hucksters love to claim in order to defend the confinement of these fascinating animals to tiny plastic cups.

Since the water they live in is shallow, it’s also warm, which is why captive betta fish require a large aquarium that can be kept heated to at least 75 degrees. They also need a filter and a large water surface in order to obtain enough oxygen—something Teddy Tanks don’t have. Most bowls that are sold to house bettas contain just a gallon of water (or even less), but they require a minimum of 13 gallons of water, according to fish expert Harro Hieronimus, who’s president of the German Livebearer Society and founder of the International Rainbowfish Association.

It’s also a myth that betta fish must be housed singly. Female bettas can live happily with other bettas, and males do fine in community aquariums that contain other species of larger fish.

Fish are smart, interesting animals who have their own unique personalities, and they feel pain just as dogs, cats, and humans do. Their cognitive abilities equal, and sometimes surpass, those of nonhuman primates. They also communicate with each other, use tools, form bonds, and grieve when family members and companions die. There is absolutely no excuse for confining these sensitive, intelligent animals to a bowl of water.

Complain to store managers whenever you see betta fish being sold in ridiculously small plastic cups or other bowls. Fish may spend weeks in these cups, slowly being poisoned by their own waste.