Paradegoers got an eyeful at Scranton’s St. Patrick’s Day Parade on Saturday as a throng of PETA’s “Lettuce Ladies”—dressed only in flirty lettuce-leaf bikinis—joined the parade on a float of their own, with an “eat green” message. The Lettuce Ladies called on spectators to kiss meat goodbye and waved banners reading, “Meat’s a Load of Blarney.” 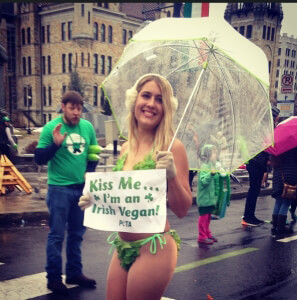 “On a day when we celebrate all things green, let your taste buds in on the act by deciding to choose delicious, environmentally friendly vegan foods,” said PETA Senior Director of Communications Colleen O’Brien. “For animals, the environment, and human health, PETA is calling on everyone to go green with vegan party foods.” 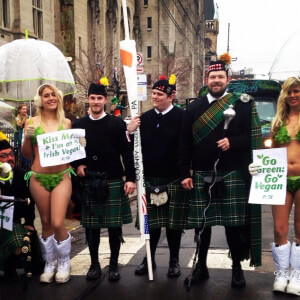 According to the United Nations, raising animals for food is “a top contributor to the most serious environmental problems, at every scale from local to global.” In its report, the U.N. found that the meat industry causes local and global environmental problems even beyond climate change. PETA, whose motto reads, in part, that “animals are not ours to eat,” has called for the meat industry to be a main focus in every discussion of land degradation, air pollution, water shortages and pollution, and loss of biodiversity. 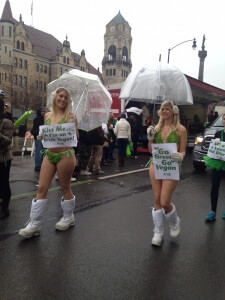