Another SeaWorld orca has died prematurely in captivity—this time, heartbreakingly, the deceased was a mere 10 months old. The infant, Vicky, died over the weekend at Loro Parque, an amusement park in Spain’s Canary Islands. The cause of death is not yet known—there are reports that she had been behaving unusually in the preceding days. 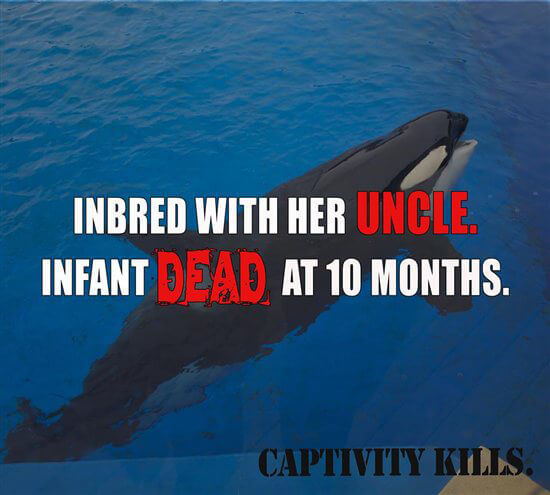 Vicky was the offspring of Kohana and Keto, two SeaWorld orcas on display at Loro Parque. Senior SeaWorld employees oversaw orca training at Loro Parque when Keto killed trainer Alexis Martinez by ramming him and dragging him underwater. Kohana, who is Keto’s niece—inbreeding is another sad outcome of captivity at SeaWorld—rejected Vicky, as she had previously done with her first calf, a male named Adan. It likely didn’t help that Kohana had been taken away from her own mother after just 19 months—ocean-dwelling orcas carefully guard their calves, and young females help the mothers care for them.

SeaWorld’s reckless disregard hurts orcas and endangers those who come into contact with them. Please tell SeaWorld that you won’t visit its parks so long as it imprisons marine animals, and spread the word on Facebook, Twitter, and other social networks, urging everyone to follow suit.